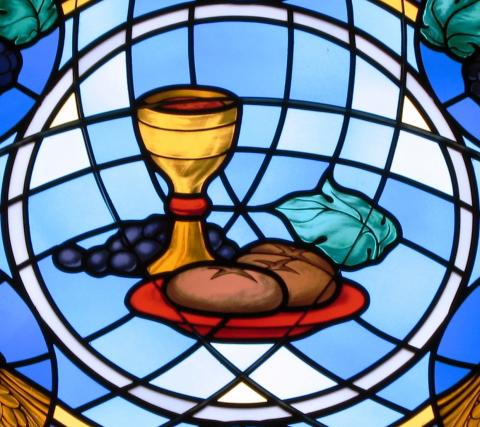 Maryknoll Father Frank Breen reflects on the sharing of the bread and wine in the Eucharistic feast as an expression of our human need for one another.

A summary of the readings:

Genesis 14: 18-20; Melchizedek brought out bread and wine
Psalm 110: 1-2, 3-4; A priest forever according to the order of Melchizedek
1 Corinthians 11: 23-26; When you eat this bread and drink this cup you proclaim the death of the Lord
Luke 9: 11-17; Jesus pronounced a blessing over the five loaves and two fishes and gave them to his disciples to distribute to the crowd. All ate until they were full.

The celebration of Corpus Christi can take on a variety of meanings, such as a focus on the sacrifice of the Mass or the Eucharist as an object of devotion. However, in the readings this year the emphasis is more on bread and wine (or fish) as symbols of Christ’s death and abiding presence with us today. Therefore, let us look more closely at the role that bread and wine, or to put it more succinctly, food and drink, play in enabling us to understand the deeper mystery of the Eucharist as a meal. The Second Vatican Council, in fact, took pains to re-emphasize something that had been lost, namely that for the early Church the Eucharist was always celebrated as a meal.

In the book "Catching Fire: How Cooking Made Us Human," British primatologist Richard Wrangham describes the profound impact the domestication of fire made on the physiological evolution of human beings. The most famous ancient hominin, Homo Erectus, most likely was the first to use fire to cook food, as we have found fossil remains of charcoal ashes and animal bones in the same place dating to around 1.5 million years ago, although this species did not actually domesticate fire until about 750,000 years ago. Human ability to cook food gave them a huge advantage over all other species that continued to eat raw food.

Cooked food led to quicker digestion, meaning that humans did not have to lie around waiting for their food to digest and could extract more protein from the food (especially cooked meat), which aided brain growth. In conjunction with another evolutionary advance, bipedal walking, humans were able to grow bigger brains that could be well balanced on top of the body. This is referred to as symbiotic evolution.

Cooking food, however, had social consequences, since cooking food takes time. As a result, the whole household gathered around the hearth while awaiting the cooked meal and then ate together. Although other species, including most primates, are social animals that live in groups, the human act of coming to the same place each evening (or at some designated time each day or most days) to eat together formed humans into the social animal par excellence. It was probably also in the action of sharing food that rudimentary forms of human language began to develop, even though evidence of true language dates back only one to two hundred thousand years ago.

Thus, we can say that from an anthropological perspective the meal is the most fundamental instrument and symbol of our social nature. Social psychology has shown that it is beneficial for humans to share a meal with others, usually a primary group such as a family, at least once a day. In contrast, living alone can be harmful to one’s health.

These realizations raise sacramental questions: is the Eucharist a meal? And if so, why did the early church choose a ritual meal as the primary sacrament for remembering Jesus’ life, death and resurrection? Furthermore, it is not only the early Christian community that had ritual meals; Jews and other peoples of the Mediterranean likewise celebrated aspects of their faith with ritual meals.

Even today food is of fundamental significance and importance to all people, and not only because we have to eat to live. In the Philippines, the first thing a guest is asked when arriving at the host’s home is whether the guest has eaten. In Sub-Saharan Africa it is essential for the host to offer a guest something to eat, or at least a hearty drink such as a full pot of tea, and it is obligatory for the guest to eat the food. The sharing of food and drink symbolizes not only good hospitality but also the common humanity shared by host and guest. Even in ultra-modern America we know how important meals are to celebrate noteworthy events, such as Thanksgiving or after the funeral of a loved one.

What does celebrating the Eucharist as a meal symbolize for us in the church today? First of all, it is a communal exercise, not a private devotion. In addition, the home-bound should receive communion, preferably in the presence of others, as a sign of their full participation in the community. The Eucharist is also a sign of breaking down class and ethnic barriers, often proclaimed when we sing, “All are welcome in this place.” And finally, the sharing of the Eucharistic meal is an expression of our will to share the economic goods of the community and of society in an egalitarian way, so that we can actively take part in the alleviation of poverty.

So, as we partake of the Eucharist at Mass today, let us make this a truly human action, a sacramental action and a divine action.