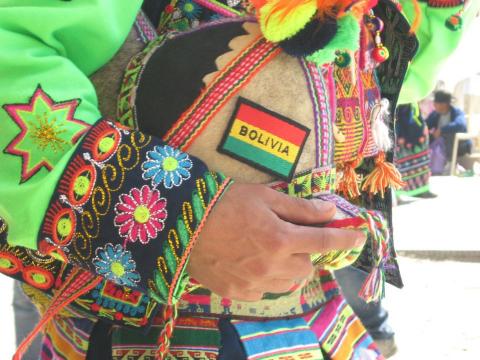 For as long as anyone can remember, in Bolivia the feast of Corpus Christi has been celebrated as a national holiday that always falls on the Thursday after Trinity Sunday. It is not a moveable feast. The day was marked by massive processions through the streets of most of the major cities of the country amid much fanfare, military bands and marching soldiers who dutifully left their garrisons to accompany the processions. Until 2009 this civic-religious holiday festival was faithfully observed along with the custom of serving local breads and platefuls of grapes to carry out the Eucharistic theme. That year, in accordance with the government’s edict in adherence with the new Constitution that for the first time officially recognized religious pluralism and equality between all faith traditions, Corpus Christi ceased to enjoy the endorsement of the national state government. However, ironically the feast remains as a national holiday on the yearly calendar.

In some ways, in taking away many of the civic trappings from the feast day, there has been more of an opportunity to shift attention back to the deeper Christian and Eucharistic significance of Corpus Christi. The Gospel reading from Luke emphasizes Jesus’ feeding of the crowds along with the Pauline text from Corinthians that speaks of the words of the institution of the Eucharist. Both readings underscore the meaning of Eucharist as a shared meal. For people in such an impoverished country like Bolivia, the meal theme resonates with the generous sharing of food that typifies their tradition of communal sharing at meals despite scarce resources.

Over the past couple of years a controversial issue surrounding the government’s decision to build a highway right through the center of one of the country’s most endangered ecological areas in the Amazon. There has been outcry and protest from the indigenous inhabitants of this region called TIPNIS (the Indigenous Territory of the Isiboro Securé National Park) who, in violation of legal strictures, were not consulted previous to the decision. The people of the TIPNIS region won the sympathy of the majority of the populace to their cause. Evident was the solidarity shown as indigenous people marched to plead for the government to cease the construction of the highway. Large numbers of people showed their support for the marchers by organizing makeshift communal dining halls and soup kitchens along the route of the procession to the capital city of La Paz.

What made the march doubly significant was the fact that much of the government’s official discourse of a commitment to safeguard the environment captured in the slogan to defend the Pacha Mama or Mother Earth so reverently observed by the 70 percent indigenous population. Bolivians, by and large, are proud of their country’s heritage of being one of the world’s most richly bio-diverse countries. Moreover, as was so clearly shown in the TIPNIS march, they were willing to run the risk against all odds to defend that treasured heritage despite the high popularity ratings of the government led by Evo Morales, Bolivia’s first elected indigenous president.

Although the economic benefits of the TIPNIS highway might produce increased revenue to finance the much needed and applauded government social programs in favor of the poor, the people of the region and their supporters expressed their awareness of the long run consequences of destruction to the fragile ecological balance of the region’s environment if the highway project was allowed to go through.

Reflecting on the Eucharistic background of this feast we cannot help but place the TIPNIS issue in the center of our faith traditions in this Year of Faith declared by emeritus Pope Benedict XVI and carried out by his successor Pope Francis who identifies so closely with his namesake and environmental champion, St. Francis of Assisi. The celebration of the feast of Corpus Christi this year takes on even more added significance when we consider developments like the debate over the planned highway through the TIPNIS region. Given the critical importance of the global environmental crisis, a re-reading of the Corpus Christi story in this context raises questions not only of the need to address food shortages and world hunger, but of how closely connected those issues are to measures to protect the environment all around our global village.

Doubtless, the story of the miracle of the loaves and fishes has universal appeal, especially in those areas of the world where hunger is an ever present reality. Bolivia’s indigenous peoples with their keen awareness of these connections are likely to see more this year in the story in light of Corpus Christi. For the moments when there is food they are satisfied and filled with gratitude, but are able to detect all of the links in the food chain as well that makes this story even more compelling for them and for all of us.