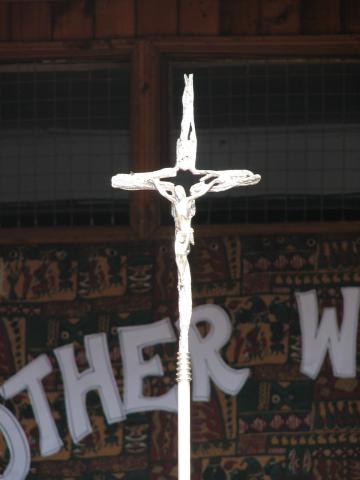 Our liturgical year comes to an end with the feast of Christ the King, which we celebrate this Sunday. As we would expect, today’s readings emphasize this theme of kingship. The first reading from the book of Daniel is a fine example of apocalyptic literature, which seeks to give comfort and reassurance to those who have suffered because of their faithfulness in God. Thus, they will be vindicated and will be rescued by “one like a human being coming with the clouds of heaven … [whose] dominion is an everlasting dominion that will not pass away.”

In later Jewish tradition, this human figure comes to signify a transcendent heavenly figure whose coming will bring the liberation of God’s people. It is in this form that the title “Son of Man” comes to be applied to Jesus, and is thus alluded to in the second reading from the Book of Revelation, very much a re-writing of Daniel in the light of Christ. The early Christian community, oppressed now by the power of the Roman empire, can look at Jesus, who himself once stood before the power of Rome (in the person of its governor Pontius Pilate) and be assured that they too will soon share in the triumph of Christ, who is the beginning (Alpha) and end (Omega) of all human history.

And so, in today’s gospel scene we find Jesus facing Pilate. Jesus’ adversaries have tried to portray Jesus as a king, “King of the Jews,” who, as a messianic pretender to the throne of David, might try to depose the rule of Rome. In response to Pilate’s question, Jesus in fact owns his kingship but quickly redefines it away from any kind of worldly rule that could be considered a threat to Rome: “My kingdom is not from this world.” And the allegiance that Jesus as “king” seeks is from all those who belong “to the truth [and listens] to [Jesus’] voice.”

“Truth” in the sense of this gospel basically means the revelation of God, as Jesus reveals God to be, and the view of human life that flows from that vision. In fact, Jesus’ whole life has been a revelation, defense and witness to this truth. From the beginning of his public ministry Jesus has proclaimed, in word and action, that the kingdom of God is at hand—this is the central message of the gospel, of the good news of salvation.

But God’s kingdom is not one of power, of imposed authority or domination. It is a kingdom where the chief goal is to bring all people to fullness of life and humanity according to the original design of God—the way of the world as God originally intended it to be. It is the kingdom of the Beatitudes, of the great reversal of worldly values where those who exalt themselves will be humbled, and those who humble themselves will be exalted; where those who are first will be last, and those who are last will be first; where those sitting at the table of the eternal banquet will be welcomed from all the ends of the earth and include people we would least expect—people who are poor, or lame, or blind—those who seemingly have had nothing to offer the world. But of course they have!

In our work with asylum seekers and refugees we have often been called to welcome and offer hospitality to people whom others might see as having nothing to offer. Perhaps such a view comes from ignorance or perhaps from fear of the other—of the one who is not like us, who does things differently, or who prays in ways foreign to us. Unfortunately, such fear or ignorance can mean that we turn a blind eye to the needs of some of the most vulnerable people in the world, and that we close our hearts and our minds to the gifts they are offering us, sometimes simply by their presence in our midst. I am thinking for example of a lovely woman from East Africa, Therese, who came to Australia where I now live almost two years ago as an asylum seeker. She was granted asylum and permanent residency soon after that.

Therese is a truly remarkable human being. She suffered much persecution in her country and was separated from her children for several years before she found them again halfway across the world, thanks to a series of almost miraculous events. I was with her the day she first talked to them again on the phone. How do you describe the emotions in someone who has just discovered that hers sons are still alive and well? She recently visited them and saw them for the first time in four years.

Therese is a devout Catholic and her faith has never wavered, even in the face of so many challenges and difficulties. She believes that God has and will always care for her and freely shares her love for God with others. She is a grace-filled person, radiant, gracious, serene and compassionate, who touches people’s lives as soon as they meet her, young and old alike. Her story is powerful and inspiring, but it is the way in which she delivers it that makes it even more so—she shares it without resentment or blame for those who caused her so much pain. People cannot but be moved by her resilience and strength in overcoming great disadvantage. Therese embodies hope—a quality and a gift so needed in our world today.

A former colleague of mine once wrote: “Hostility comes from ignorance, hospitality from openness. Hostility towards strangers is born in a heart with barriers, hardened and incapable of seeing richness in diversity. The shift from hostility to hospitality happens when one experiences welcome, this gift of opening oneself to the reality of an individual or a family...”