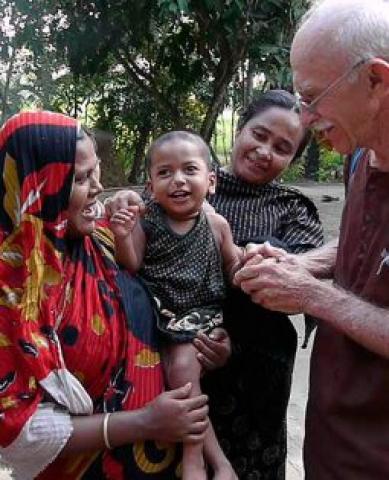 Do we live in a global village?

When our species was evolving, beginning about 200,000 years ago, humans lived in small, isolated villages of several hundred people and viewed those living in villages perhaps twenty miles away as potential threats and even vile enemies. Given the global threats we face today – environmental challenges, gross economic disparities, increasing nationalism, denigration of those who are different, and the dark cloud of nuclear weapons constantly hanging over our heads – we have to ask if our evolutionary heritage of fearing the Other is workable today.

Holmes Rolston III is quoted in John T. Carroll’s Introduction to the Gospels as saying: “Distant peoples and far-off descendants do not have much ‘biological hold’ on us. (But) now that we live in a ‘global village’ global threats require us to act in massive concert of which we evidently are incapable.” Carroll explains that “other-regard, Jesus style, must extend beyond one’s family, kin, or in-group, even to all.” Moreover, he continues, this regard must be extended to generations not yet born and to the natural world, as an ethical response to Gospel presentations of Jesus’ practice.

The gift of salvation

The extension of the gift of salvation to all peoples (ethnos in Greek, also translated as Gentiles) is the primary message of today’s gospel about travelers from a distant country, probably Persia, but possibly also Babylon, who recognized God’s action at work in all countries. The astrologers said they saw the “star rise in the east,” and later saw the “star stop at the place where the child was.” The word ‘Epiphany,’ which means appearance or manifestation, usually of a hidden power or mystery, is not used in the account in Matthew’s gospel but accurately describes this story. In much of Matthew’s gospel Jesus restricts his preaching and miracles to the Jewish people, but this gospel foreshadows the final verse of the gospel, when the risen Jesus commands the apostles to “make disciples of all nations.”

This pivotal gospel message is reiterated in the Epistle to the Ephesians, in which Paul states forthrightly that he has been entrusted to reveal the mystery that pagans, i.e. all peoples or nations, are co-heirs with Israel of God’s promise. The claim that the nations will come to God’s light is also made in the first reading from Isaiah, symbolized by gifts from eastern countries likewise asserted in Matthew’s account of the Magi’s visit.

Solidarity with all people

The universal message of these readings, and of this feast day, calls us to a greater solidarity with all peoples. We must transcend our limited horizons and view global challenges as if we were looking down on planet Earth from a spaceship, a panoramic view that reveals one united biosphere not divided by national boundaries. Given our scriptural mandate and our species’ global challenges, it is incumbent on all to search as one united human race for solutions to the problems that plague us all.

One example is global poverty. In the year 2000, the United Nations issued the Millennium Development Goals. The first goal stated the intention of all nations to halve between the years 1990 and 2015 the number of people throughout the world earning less than $1.25 a day per capita. In fact, by the year 2015, this goal was exceeded. In 2015, these goals were succeeded by the Sustainable Development Goals, and once again, the first goal is to “End poverty in all its forms everywhere,” and to be accomplished by the year 2030. This is an ambitious goal, because as of the year 2016, it was estimated that 783 million people were absolutely poor, earning less than $1.90 a day per capita, constituting 10.7 percent of the world’s population. However, every year about one-quarter of the countries in the UN system must give full reviews of their progress in implementing these goals, with the result that all countries take their tasks seriously.

The UN has set a number of targets to achieve this goal of poverty eradication, such as ensuring equal access of all people in each country to economic resources, basic services, control over land and property, financial services and appropriate technology. The UN also calls on all nations to mobilize resources in order to enable the developing countries to implement programs that will realize this goal of eliminating absolute poverty. This is one example of human will transcending our differences and overcoming the natural, evolutionary inclination to care only for family and those within our immediate orbit.

It behooves all of us who listen to the word of God today, on the Feast of Epiphany, to learn about the UN goals and to commit to finding ways to be a part of this global endeavor.