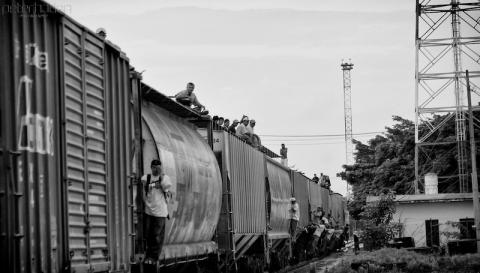 On Mother’s Day, a group of women from the parish church in the Mexican town of Palenque – all with grown children of their own – carried huge pots of food and fruit drinks to the dusty railroad yard at the edge of town. As they unloaded the food under some trees, people began to line up – men and women, most young, some older, a few with children, one woman who was eight months pregnant.

Most were from Honduras and Guatemala and had been traveling for as much as a week already. They had left behind families and friends and were about to climb atop the cars of a freight train for the most dangerous part of the journey north. They all knew the hazards – they could be kidnapped by criminals and held until relatives in the United States wired a ransom payment, or they could fall off the train and be killed or maimed. They said the potential reward – a new life in the United States – was worth the risk. They trusted that God would watch over them.

Besides food and drink, the women from the parish offered smiles and words of encouragement. They walked along the train to be sure everyone had eaten. When they ran out of food before the last of the travelers had eaten, they pooled their money and bought some roasted chickens and potatoes from a nearby restaurant. They tried to find a pharmacy that sold an ointment to treat a man’s eye infection. And they passed around a list on which the travelers could write their names, ages and hometowns, so there would be a record if they disappeared on the hazardous journey north.

Several travelers commented that they were grateful for the Migrant Houses along the route, where they could bathe, eat and rest before setting out again. Most of the houses were run by Catholic Church workers who welcomed them even though they were evangelical Protestants.

That day in the railroad yard in Palenque, Mexico, was Epiphany – a moment when God’s presence was revealed among people from different countries, people of different faiths. Like the magi, the women from the parish offered gifts that were treasured by the people in the railroad yard – food, a smile, a friendly word. And the migrants responded with a gift of trust and hope – trusting in God as they followed the star of hope north toward the U.S.-Mexican border.

Some of the travelers had been deported to their home countries after overstaying their visas and were trying to return to their spouses, children and businesses. Others, like José María, were going to make their first attempt to cross the border. That day was José María’s 23rd birthday. As he climbed to the top of a tanker car, carrying only the possessions that fit in a small gym bag, he said, “Sometimes you make decisions that may not seem like the best ones, but you have to try.”

Like the magi, he had set out on the journey without knowing how long it would take or where it might lead. He set his sights on the future and trusted. He saw God in the women who served him food, and they saw God in him and the hundreds of people like him who pass through Palenque every week in search of a brighter future for themselves and their families.

Epiphany reminds us God is revealed in unexpected ways and unexpected places. The magi went looking for a king and instead found a newborn baby in a stable. But they recognized God’s presence there, just as Mary and Joseph saw God in three seekers of truth who came from a foreign land and a foreign culture, whose religion was not the same as theirs.

Epiphany challenges us to examine our own lives. How do we respond to people from different lands and cultures who enter our lives, especially to migrants who are seeking better opportunities or refugees who are fleeing violence and fear? Do we welcome them as the women in Palenque did, only offering food, shelter and healing without judging them by the color of their skin, country of origin, religion or identity documents?

In his papal exhortation on the challenge of the Gospel in today’s world, Pope Francis reminds us that ours is a “Church without frontiers, a Church which considers herself mother to all,” and that migrants “present a special challenge.” He calls “all countries to a generous openness,” and urges us to “overcome paralyzing mistrust” and “integrate those who are different.”

Epiphany and the papal exhortation call us to pause and reflect: how well do we, our families, our church communities and our wider communities welcome the stranger, the foreigner, the one who is not like us? Are we open to such a manifestation of God in our midst, even if it makes us uncomfortable? Are we willing to welcome those people into our lives and enter into theirs? Or, like Herod, do we fear that they will displace us from our homes or the lifestyle we have known?

Opening ourselves to that encounter with the stranger – and with God – makes us vulnerable, and we cannot be sure where it will lead. But as Isaiah reminds us, that is precisely what God is calling us to do:

“The glory of the LORD has dawned upon you
Though darkness covers the earth,
and thick clouds, the peoples,
Upon you the LORD will dawn,
and over you God’s glory will be seen.
For God rescues the poor when they cry out,
the oppressed who have no one to help.
God shows pity to the needy and the poor
and saves the lives of the poor."