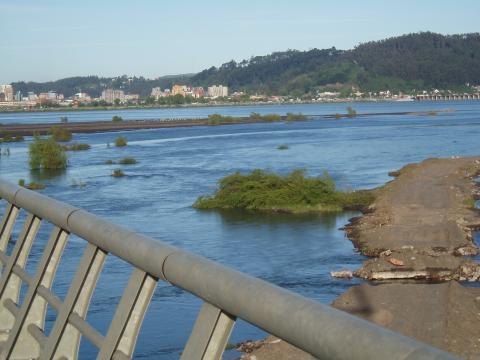 Sister Carol Marie McDonald, MM, recalls a powerful encounter with a sick woman during Easter week in Chile and reflects on what the vulnerable can teach us about faith.

The celebration of Holy Week and Easter always brings so many stories and deep, strong emotions – from the feeling of pride and loyalty of being called to be a disciple of Jesus, to the experience of the Passion, and, finally, the joy of the glorious resurrection of Jesus.

One of my fondest experiences of Holy Week in Chile was the privilege of traveling to isolated rural villages (where priests rarely traveled for Mass) to conduct Holy Week services with the people there.

I lived in Talcahuano, near the city of Concepción, but was assigned that year to spend Holy Week in a little village called “Torre Dorada,” a long day’s trip from Talcahuano by bus, then a train to San Rosendo, followed an hour’s rowing across the Bio-Bio river and, finally, a four-hour trek up the hills to Torre Dorada.

Leticia, a young catechist, and I set out early Tuesday morning, and on arriving to the opposite side of the river Bio-Bio, before climbing the hills, several men met us and asked if I was the sister who was going to Torre Dorada and if I was carrying the Blessed Sacrament with us. I said yes, and they told me that there was a young woman who was very sick, and that she would like me to visit her before we continued on our journey.

They took us to a simple little house near the bank of the river. We found a young woman, Rosa, in bed, her mother sitting beside her. She was suffering from esophageal cancer and she had recently been released from the hospital, the doctors having told her that there was nothing more they could do for her.

Rosa asked if I was carrying the Blessed Sacrament. I said yes, would she like to receive it then? She asked when we would be returning. I said we would be leaving at dawn on Easter Sunday morning. “I’ll wait,” she said.

We prayed a short time with her then continued on to Torre Dorada. I knew many of the people because Leticia and I had been there a few months earlier. We visited every home on Wednesday and then celebrated Holy Week with the community for the Triduum. We told them about Rosa asking to pray with them each day, which they accepted as a great honor.

We left just before dawn Easter Sunday and went directly to Rosa’s house to find her and her mother waiting for us. Beside her was a little table with a white cloth, a small cross, glass of water, a spoon and a candle ready to be lit – and Rosa was smiling. She was able to receive a small piece of host and swallow it. She closed her eyes and we soon left.

The people from Torre Dorada had asked for us to send some catechetical materials when we returned and to inform the telephone operator at the train station when we had done so . When called on Tuesday, the operator asked me if I was the same sister who had visited Rosa, and then told me that Rosa had died at 1:30 in the afternoon on Easter Sunday.

It was as if she simply wanted to be with the community singing “Alleluia,” celebrating the triumph of Jesus over suffering and death.

For many years we’ve heard how important it is to unite our prayers with the prayers of the Church throughout the world. Recalling Rosa’s strong, clear face full of extreme suffering challenges me to look again at the role the sick and infirm play among us. We see how those who seem to be the most vulnerable among us lift us up to a stronger, fuller faith.

Photo of the Bio-Bio river By Paul Edmonds, aka Conce at en.wikipedia - Public Domain, https://commons.wikimedia.org/w/index.php?curid=16047511