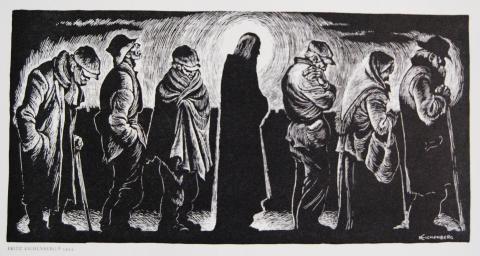 Maryknoll Father Frank Breen reflects on the "Divine Reversal" that includes the birth of Jesus.

A homeless couple arrives in Bethlehem and can find no place to lodge. The woman, at the end of her term, can give birth to her first child only in a manger reserved for animals. The only ones who come to witness the birth are the most scurrilous characters in first-century Judea. And the gospel applies to this obviously insignificant child titles given only to the greatest, most important leaders in society.

Is the evangelist delusional? Are we supposed to believe that God would really implement divine plans in this manner?

The infancy stories in Luke’s gospel are a prologue to the whole gospel. A prologue is not to be read as Chapter One in a chronological account of Jesus’ history, but rather as a summary of the whole gospel in story form, and the point of Luke’s prologue is that what humans expect is not what God does. When the divine enters into human affairs, it defies human logic, confounds human expectations, and usually goes unrecorded in important news outlets. This is what is known by scripture scholars as the "Divine Reversal."

Let us look at the story.

First, it is obvious that Jesus is born absolutely poor.

Later in the gospel Jesus says that he has nowhere to lay his head. He was poor at birth and remained poor throughout his life.

Poverty has many aspects. For an absolutely poor child, to survive to adulthood he must beat the odds. In the first century, over half of the children born in the Mediterranean world died before age ten, a statistic that lasted until the 20th century. In the year 1900, in most poor countries of the world, fifty percent of children died before the age of five.

Poverty also connotes powerlessness and lack of standing in society, in contradiction to prophet Malachi’s prediction: “The Lord you are longing for will suddenly enter his temple; who will be able to resist the day of his coming?” There was no expectation in First Century Palestine that a homeless, powerless figure could bring liberation (salvation).

Second, Jesus was born to a teenage mother.

To be born to a teenage mother is not unusual in the first century. Unfortunately, it is not unusual in many parts of the world today, but it is still just as dangerous, as teenage girls are not physically ready to be mothers (let alone psychologically ready). Over 500,000 women worldwide die each year during pregnancy or while giving birth, of whom only one percent are in wealthy countries. For teenage mothers, the mortality rate is five to ten times higher. Was God not aware of this? Couldn’t God have planned this better?

As if these factors were not enough, the gospel makes direct reference to the Roman Empire, citing the census decreed by Caesar Augustus while Quirinius was Governor of the colony. This reminded First Century Jewish readers of another famous Galilean, Judas the Galilean, who led a revolt against Rome and was crucified along with hundreds of his fellow rebels. Clearly, the prologue of Luke’s gospel foreshadows great danger facing Jesus if he intends to carry out a prophetic mission advocating justice for the poor and especially if he intends to directly confront Roman imperial rule.

In addition, look at the kind of people who witness Jesus’ birth: Shepherds!

In first century Palestine shepherds were considered thieves and rogues and were lumped together with publicans and tax collectors as sinners, according to the Pharisees. The gospel says that Jesus regularly ate with sinners; and Luke’s account of Jesus’ birth says that Jesus began his life surrounded by sinners – the shepherds. Again, I think we have to question God’s wisdom in this kind of plan.

Finally, there is a promise of peace on earth.

According to the Romans, it was the Roman Army that was bringing peace on earth, the Pax Romana, every time they conquered another small country, such as the Jewish nation in 70 C.E. God turned this logic on its head when God entered the world in human fashion, to show that peace comes through non-violence, love, forgiveness and reconciliation.

What does the Divine Reversal mean for us today?

If we think for a bit, each of us can probably come up with an example. The following is one small example, following on the theme of homelessness that began this reflection.

Not too long ago, a woman who regularly volunteered at a homeless shelter had her husband leave her. A short time later, she lost her well-paying job; and finally, she lost her house. She got another job and was able to rent a small apartment for herself and her children but could not afford to pay movers. The homeless people at the shelter were informed of this and on the day she moved, she hired a van, and four homeless men from the shelter came to do all the heavy lifting – for nothing.

God is definitely human and acting in our world. And humans are reversing the age-old ways of selfishness, greed and violence, and instead acting in divine fashion. This is what the divine reversal means.