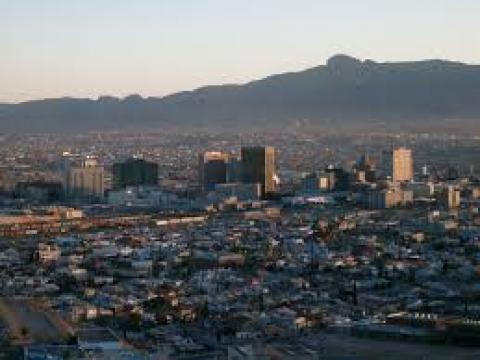 Even now, says the Lord, return to me with your whole heart, with fasting, and weeping, and mourning; Rend your hearts, not your garments, and return to the Lord, you God...Perhaps he will again relent and leave behind upon you a blessing... Joel 2:12-18

The Franklin Mountains to the north and Sangre de Cristo range to the southwest form the famous Paso del Norte that embraces the sister cities of Ciudad Juarez, Mexico and El Paso, Texas. From the mountains, even the experienced eye finds difficulty in discerning the edge of one city and beginning of the other. Often people speak of this border where Texas, Mexico and New Mexico all come together, as a single reality with many heterogeneous layers. In the late 1990s, a gracious invitation from the Maryknoll Border Team led me to live and work in the communities there. In this very unique part of the world, which one author has called a laboratory for the globalized future, the experiences of people's diverse lives are so often woven together in a complex and common reality.

The spiraling drug cartel violence of Ciudad Juarez in recent years has raised awareness of the historical fluidity of the El Paso-Juarez border. Much attention has been drawn to the economic and political forces that lead 250,000 people daily to cross one of four bridges between the two cities. But as a pediatrician, I was aware of an equally compelling force: babies. Time and again, I encountered families whose members and lives spanned both sides of the border- a mother from El Paso, perhaps with dual citizenship, a father with large extended family from Juarez. It was simply understood that the new baby would live and grow connected to all family members and so frequent back and forth crossings were very common.

Violeta was meant to have such a story unfold when I first met her in the pediatric ICU at the age of 14 months. But the typical fluidity and abundance of her border story had been disrupted by premature birth and lungs not yet ready to take in sufficient oxygen on their own. A tracheostomy was placed, various medications in combinations and cycles given and the hope was, in time, Violeta's scarred lungs would heal. Yet Violeta seemed to grow no stronger as the days passed. Her mother was ever patient and present to her young daughter. Like a wise Trappist monk, she kept vigil in the ICU, as the weeks unfolded into months. There had been a single time at eight months of age, when Violeta had been briefly discharged from the hospital only to return a few days later. But in that time, her mother had taken her to see her father in Juarez and she so often referred to the importance of that visit. If she could recover, they would return again.

A complicated pneumonia at the age of 22 months took Violeta into rapid decline. Her mother approached those final days with the same serenity and intentionality with which she had attended her daughter in the earlier months of guarded hope. I recall her quiet tears the day Violeta drew her last breath. Would I come, she asked, to the funeral in a little church on the east side of El Paso? Por supuesto, I replied, I would be honored. The funeral was quiet and dignified with a small gathering of people. I was so sorry, I murmured, her father could not be here. Yes, this is hard, her mother said. But next week, we will have the funeral in Juarez. She smiled faintly, "The grieving and celebration of her life would not be complete without this."

In that moment, this wise and grieving woman taught me what it might mean to respond, to return to God with a whole heart. She deeply loved her daughter, had yearned for her to heal and had hoped to return with her someday to Juarez. When these dreams could not be fulfilled, she did not grow bitter, but instead found a way to navigate, even celebrate a difficult geography with dignity and grace. She, like so many gracious people of the Texas-Mexico border, have taught me that when we can return to God with our whole heart – with our joy, remorse, grief and gratitude – surely God will leave behind upon us a blessing.