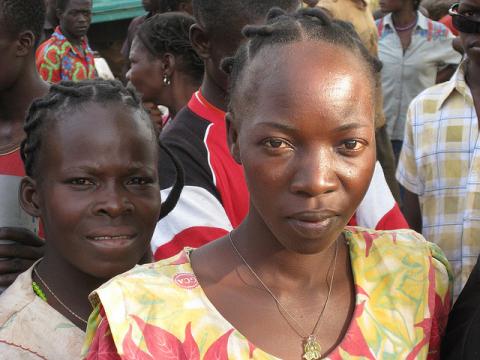 In the same letter to the Corinthians, Paul declares that “godly grief produces a repentance that leads to salvation and brings no regret, but worldly grief produces death.” How profound this seems, as we face this time of repentance and are reminded so forcefully that we are dust and unto dust we shall return. Joel says return to the Lord “with all your heart, with fasting, with weeping and with mourning . . .” And Matthew emphasizes that with fasting, prayer and almsgiving, it is essential how we do these things: with authenticity and no calculation of how we might profit from them. Building on these insights, what Paul is emphasizing by the term “godly grief” is that the way we face and wrestle with grief, is what determines if it will lead to a true transformation of ourselves and how we journey in this world.

One of the most profound examples of this in recent times is reported in the book The Sacrifice of Africa (150-165). In October 1996, Angelina Atyam was devastated to be told that her 14-year old daughter was among the 30 girls who had been abducted from their school by the Lord’s Resistance Army in northern Uganda. She describes herself as screaming and falling down with anguish, and then going to the school which appeared as a graveyard with groups of parents wailing. “The children were gone!”

So every Saturday the parents would meet for fasting and prayer for their daughters. And then one day a parent stood to lead them in the Lord’s Prayer. As they prayed the words, “forgive us our sins as we … we found we could not go on.” At that moment after weeks of prayer they found that they were all convicted by the bitterness and anger still in their hearts toward the rebels and towards God.

Angelina said “that bitterness and anger was a stumbling block. We were convicted of the need to first deal with our feelings of hatred and to pray for forgiveness towards the rebels. This became our sacrifice, praying for them.”

Thus began the transformation of Angelina’s grief within herself that would eventually lead to very real steps towards peace in her life and small moves towards sustainable security in Northern Uganda. Her first stride was towards the parents of the rebels. She found the mother of the rebel commander who was keeping her daughter as his “wife.” She said to her, “I am here to tell you that I have forgiven your son who is holding my daughter hostage. I have forgiven your clan, because I need to be free inside. I have also forgiven your tribe. And I want you to be free with me.” After some uneasy moments, in the end they embraced and cried together – the tears of freedom.

Angelina was offered her daughter’s return if she would stop her advocacy. But Angelina forestalled her own daughter’s release demanding that all the girls be freed. Five of the 30 girls died in captivity and of the remainder all but two eventually made their escape by 2006. Angelina’s daughter Charlotte was among those who escaped.

The parents continued their prayers and sharing their forgiveness with others of the community. Their efforts gave birth to an association in Uganda known as the Concerned Parents Association which has developed international ties in their advocacy on behalf of children. They offer counseling for children who have escaped or been released by the rebels, healthcare and income generating training skills, and relief and development projects for youth. All of this is done to fulfill a dream voiced by Angelina: “I see children playing in those green fields: I hear joyful laughter, singing songs and holding hands. They are Luo, Madi, Acholi and Baganda children; white and black children playing together.”

Even though violence continues in northern Uganda, Angelina was transformed as were the other parents when their grief was carried in a “godly” way rather than in a “worldly” way. Bitterness and anger were changed to forgiveness and the very real attempt to build trust and peace in an area dominated for years by ethnic mistrust and violence.

All of us are carrying grief from loss in a variety of ways: the loss of loved ones; the loss of jobs; failed relationships; failed aspirations for ourselves; and the systemic losses of political and economic dreams. Part of life is loss which leads to grief. But grief, depending on how we carry it, can lead to bitterness and anger or to freedom, peace and a new sense of self. On this day of Ash Wednesday, we recognize loss as a necessary part of life and we affirm our deep commitment to carry it in a “godly” way which brings transformation, peace and life.

Photo from the BBC World Service