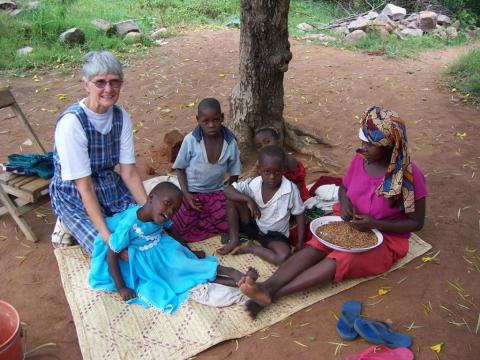 The following reflection, prepared by former Maryknoll lay missioner Bertha Haas, can be found in A Maryknoll Liturgical Year -- Reflections on the Readings for Year A.

“The souls of the righteous are in the hand of God… God tested them and found them worthy of himself … They will shine forth, and will run like sparks through the stubble. …” Wisdom 3:1, 5, 7

Today’s readings exhort us to a faith and hope that turn things topsy-turvy. In the eyes of many, the children with disabilities whom we serve at Huruma School are afflicted, are a punishment to their families. They are often regarded as mizigo or baggage. But as we see them at Huruma, they are already shining. They may not be able to walk or speak clearly, but their personalities sparkle – as contagious as sparks in dry stubble.

When a neighbor visited 16-year-old Halima, who lives with cerebral palsy, at school waving gaily at guests and dancing with her classmates – yes, in her wheelchair – she could not believe this was the same child she had seen isolated in a dark room at home.

Enoch and Edward are nine years old and had attended other schools before coming to Huruma. Similar disabilities have drawn them together. Their joy in each other permeates their classroom. Enoch is so pleased to be at Huruma where he says “no one is afraid of me.” At his prior school his classmates would run away from him because in his unsteadiness he would sometimes grab a classmate’s arm to steady himself. Since neither Enoch nor Edward is steady on his feet, they enjoy racing against each other. If they fall, they get up and run on, confident that classmates will cheer them on, a confidence as strong and as comforting as the comforting confidence we are urged to have in God.

I am struck by the phrase from the book of Wisdom: “… run about as sparks through stubble…” What an image of Resurrection! Traditionally in Tanzania, ancestors are an important part of the family. Ancestors are to be honored. One’s behavior is to be true to their values. In turn, the ancestors protect the community. So All Souls’ Day is very important, overshadowing All Saints Day. After the Jumuiya (small Christian communities) spend several days cleaning the cemetery, the parish gathers there for Mass the evening of November 2. Those preparing for baptism and confirmation – children, youth and adults – are especially encouraged to participate in the preparation and the celebration as a sign that they are willing to join fully in the work of the community. In the Mass the entire community, the living and the ancestors, join together in this great act of worship. All the choirs unite signifying the importance of this Feast.

Today’s readings can be an avenue of healing, a source of New Life, for a family that has lost a loved one whose life brought shame or trouble to the family. Daudi’s father was an alcoholic, who died during a night of drunken wandering. The reading from Wisdom has given Daudi, a young adult, a new image of his father. His father’s alcoholism was a trial through which he was “found worthy” of God. It was an affliction which Baba (the loved father) was unable to cast off in this life. But Baba is now free from this affliction. Having received grace and mercy, he now “runs about as sparks through stubble,” igniting flames of love. Believing that Baba is now finally at peace, Daudi has been able to pull firmly to his bosom Baba’s values: forgiveness, unity within the family, talking out problems that may arise.

Truly, death is not the end. Rather, it is the beginning of a new life, a Resurrection, not only for the deceased, but for those who mourn as well.

Photo of Bertha (left) in Tanzania by Marie Dennis.