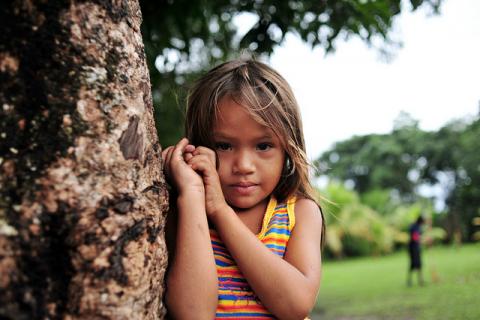 On this All Saints Day, I rejoice in the unofficial and unrecognized everyday saints I came to know during my two and a half years living with small farmers and land reform activists in Brazil. I give thanks that we celebrate All Saints Day in the midst of Ordinary Time. How fitting to reflect on how it is the day-to-day, ordinary decisions, thoughts and actions that make saints who they are. If they had not proven themselves during the ordinary tasks of living – living with love, authenticity, justice, mercy and goodness – they most likely would not have been able to be faithful in times of great distress or trial.

I think of what a Brazilian Franciscan friar said at a social justice gathering in which people reflected on ethics. He shared that ethics are the moment-by-moment decisions we make. Each little decision is a way to measure whether or not we are building up the New Creation God desires for us.

My time on the small farm and land settlement, Nova Santo Inacio Ranchinho in Minas Gerais, Brazil, allowed me to witness first hand many unrecognized and unofficial saints making decisions that built up God’s New Creation. I think of and hold on my heart my Brazilian grandmother, Vo Maria, who was a farmhand all her life, moving from plantation to plantation with her family, never having the opportunity to go to school or to learn to read or write. She is one of the hardest working and wisest people I have ever known. I think of her daughter, Tiana, the owner of the small farm where I lived, who after a car wreck had to search in the dark for four of her seven children who were thrown from the back of the truck. She held in her arms one of her daughters who died from the wreck and found another daughter, Rosa, who now had become paralyzed. Tiana also cares for her youngest son who has Downs Syndrome; she advocates tirelessly on behalf of him and others with disabilities.

Each day on the farm, Grandma Maria cleans the houses on the lot, washes the laundry and cooks for the extended family of 10. Tiana awakes each morning and helps Rosa with feeding, bathing and going to the bathroom. She also assists her other sons with the day to day tasks of running their family farm, such as milking the cows, feeding the pigs and chickens, repairing fencing, planting, maintaining and harvesting the crops. Every day Rosa, despite being paralyzed, helps her own daughter, along with the other children on the family lot, with their school work. Rosa is also involved in teaching adult literacy and faith formation classes. She tells me that at night when she cannot sleep and can only lie in bed unable to move, she prays for me and everyone in the world.

I learned from the farmers that the Nova Santo Inacio Ranchinho land settlement was established over 20 years ago, but only after the 118 families encamped for about seven years under tarp tents on the side of the highway. Like most landless families, they faced much

discrimination, persecution, threats and violence as they actively sought land reform. Despite Brazil having one of the strongest economies in the world, it still has one of the greatest disparities in wealth, as well as land distribution. According to the Catholic Bishops’ Pastoral Land Commission (CPT), 34 people were killed over land disputes in 2010, up 30 percent from 2009.

In the past 20 years, over 1,150 rural land activists have been murdered due to conflicts with agrarian reform. Of these, less than 100 cases have gone to court, only 80 killers have been convicted and just 15 of those who hired the gunmen were found guilty, according to the CPT. The Pastoral Land Commission also claims that the killings are mostly carried out by loggers, ranchers and farmers to silence protests over illegal logging and land rights. (One of the thousands killed was Dorothy Stang, a Sister of Notre Dame de Namur, who died in 2005.)

Today’s first reading from Revelations points to all those killed in the struggle for land and the environment when it speaks of those whose foreheads are marked with the seal of the servant of God before any damage to the land, sea and trees takes place.

I continue to be inspired by the three generations of women on the farm where I lived in Brazil. Day in and day out, Grandma Maria, Tiana and Rosa reflected the Gospel back to me and countless others. My ears rejoiced in hearing the soul song that the three sang as they went about their ordinary, day-to-day tasks and responsibilities required to run their family farm. For me, these three women are among those who have "come out of the great ordeal" mentioned in today’s first reading. They have been through the fire and have stayed true to a loving God who desires us to build up the New Creation.

They are among the Blessed the Gospel describes – for theirs is the New Creation and they have inherited the land. And every time their soul song echoes in my memory, my heart responds with the Psalmist, "this is the people that longs to see your face" and I believe that one day they (along with all other just ones who have survived great distress) will see the face of our loving God.