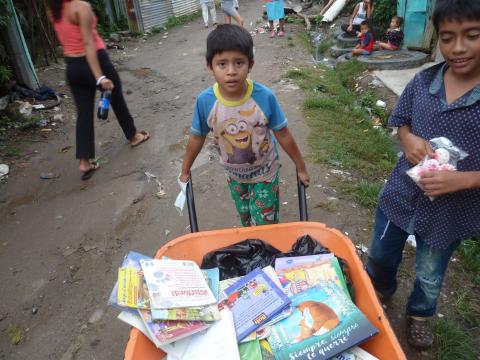 Rick Dixon, a Maryknoll Lay Missioner in El Salvador, reflects on following Jesus to the margins.

In our two previous Sunday Gospel readings, Jesus and his disciples travel openly in the towns of Galilee. Jesus speaks publicly in the synagogues, heals the infirmed, silences demons, and speaks with an authority never seen before.

In today’s Gospel Jesus heals a person affected with leprosy. It is the climax of all previous healings, for it not only liberates this man from one the most abominable diseases of his time, it also propels Jesus into new geography. Not only is the leper healed, but it prompts Jesus to reorient his life and ministry: “... [the man with leprosy] went out and began to talk freely about [his healing], and so spread the news, so that Jesus could no longer openly enter a town, but was out in the country [on the margins of society]; and people came to him from every quarter.”

This abrupt change in geography is also an abrupt change for those who seek Jesus. It opens a new world for them; it offers healing at its deepest level, that is, the power of pilgrimage to the margins. The term pilgrimage comes from the Latin “peregrinato,” meaning a journey into the foreign.

But what could Jesus’ change of place, his journey further into the peripheries, mean for his followers today?

Perhaps Brandon can help us understand. He is five and was born in La Esperanza, a poor refugee settlement in El Salvador that dates back to El Salvador’s civil war between 1980-1992. Brandon often asks me, “Cuando vienen los gringos (when are the gringos coming)?”

Brandon is usually pushing our orange wheelbarrow, the mobile unit from our library, when he asks this. In asking about the “gringos” he is referring to the visitors from the U.S. who participate in the Maryknoll Lay Missioners’ Friends Across Borders program (FAB). With the COVID-19 situation, it has been a year since our last FAB delegation from the U.S. visited our family literacy program in El Salvador and spent time with Brandon. During that visit FAB participants gave him lots of loving attention and read lots of children’s books with him. When a woman named Becca held him and pointed out words and illustrations from Dr. Seuss’ The Cat in the Hat, Brandon’s imagination soared and his face was full of joy.

So you see, his question, “Cuando vienen los gringos,” isn’t just a rhetorical question. When Brandon asks it, his brown eyes grow big with expectation and hope. He feels something strongly, something that summons up an experience that hasn’t faded with time. His encounter with those who came from far away to be with him left a deep, unfading mark.

Brandon’s question makes me think of what Jean Donovan, one of the four U.S. churchwomen martyred in El Salvador, said about the children here: “I want to get closer to God and going to El Salvador is the only way I think I can… I don’t know how the poor survive. People in our position really have to die unto ourselves and our wealth to gain the spirituality of the poor and the oppressed. I have a long way to go on that score. The poor can teach you so much with their patience and their waiting eyes. We are all so inadequate in our help. Several times I have decided to leave El Salvador. I almost could except for the children, the poor bruised victims of this insanity.”

Jean wrote this more than forty years ago just before her martyrdom on December 2nd, 1980. And Brandon’s eyes still say it all -- that venturing to that margins is still worthwhile, that it only gets better waiting and hoping and living on pilgrimage in search of Jesus of Nazareth, who is deeply present here at the peripheries.