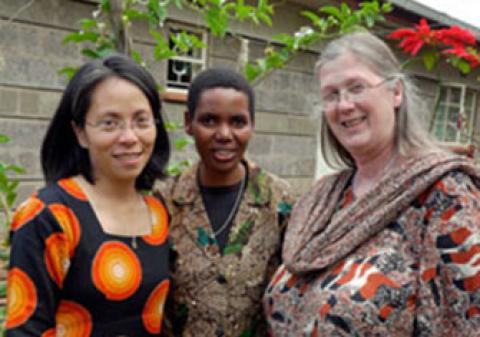 Sr. Teresa Hougnon, MM, reflects on the healing that can come from listening to the voice of God speaking through the prophets in our midst.

“If today you hear His voice, harden not your hearts.” The readings today speak of God’s desire to speak to us, and for us to hear His voice without fear. Healing can take place if we are able to receive God’s word and allow it to touch us.

Jesus came among us like the prophets, speaking with authority. We hear in Mark’s Gospel today that the unclean spirit could discern the voice God. The spirit cries out, “What have you to do with us, Jesus of Nazareth?” Jesus rebukes the spirit and the spirit leaves the man, restoring wholeness to the man.

Jesus’s voice had authority and power, the power to move unclean spirits, the power to move us if we are open to hear his word. There is a resonance in his words. When he speaks with authority, it is heard by the people, acknowledged and reflected back to him. In a similar way, resonance can help us discern God’s voice in our lives today.

In my mission in Kenya, I and my fellow sisters worked in communities that have experienced conflict and trauma through political and ethnic violence. We created space for conversations to happen among community members, some perpetrators, some victims, all impacted by the conflict.

Today’s Gospel reminds me of a particular young man that came to the conversations. He had been a victim; he saw his father murdered by the others. He had become a perpetrator, taking up the fight to avenge his father’s death. He later confessed he had come to the program to befriend his enemy, to draw closer and then kill one of them. But he found himself listening to what was being said. He heard his own words being reflected back to him. He heard the pain, the trauma, the fear of being destroyed. The words resonated among the group. In the quiet sharing of the group, he could let the vengeance go.

The resonance of the truth-telling among the participants created a shared understanding. The group created a container in which to heal the trauma, to restore or build new relationships. This young man befriended his enemy, forgave his enemy, and has helped to create lasting networks among his community.

God’s voice was heard in the conversations; God was present among us. Each one of may have been a prophet to another, or heard a prophet speaking to them. There was resonance, and as each of us allowed the word of God to touch through each other, we were healed. We could set aside our fear, soften our hearts, and allow another to speak to us.

God does not want us to be anxious. Our distractions come from everyday life. But if we listen for the resonance, if we allow another’s words to touch us, we have nothing to fear. Today, Jesus teaches us with authority, even through the words of one another.