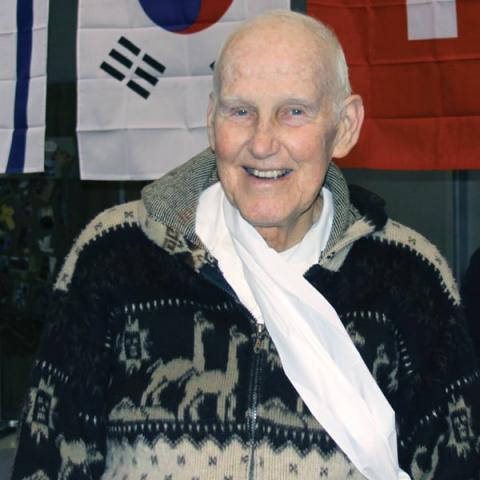 However there are five who are foolish. They lose hope quickly. They are not curious, they don't notice things. They fall into doomsday scenarios that he will never come. They don't think of maintaining their supply of oil. They allow their torches to flare out.

The groom arrives. The sensible bridesmaids met him and entered into the wedding to celebrate. The foolish ones by their laxity could  not celebrate.

We are told to keep our eyes open, for you do not know the day or the hour.

I was stationed in Germany as a helicopter pilot in the early 1960s while doing my military service. It was the time of the "cold war" when we feared a Russian invasion. We had to patrol the borders. On August 13,1961 the wall was built in Berlin. There was a temptation to fall into the mode of the foolish bridesmaids and to let our vigilance down feeling that we could not do anything about this. President John Kennedy came to Berlin on June 26,1963 and gave his famous "Ich Bin Ein Berliner" speech to maintain hope that this wall had to come down. He told us to keep our torches burning. I rejoiced on Nov. 9,1989 that the wall did come down and East and West were united once again.

I was ordained a Maryknoll priest in 1967 and sent to serve the Mapuche Indigenous in Southern Chile. They had held out against the Conquistadores until the late nineteenth century when they were finally conquered and two thirds of their lands were taken away. They became more and more impoverished. Maryknoll responded to their needs. We built schools in the Reservations where the people were settled. We initiated  numerous economic projects in animal husbandry and sowing crops. We had 17 Christian Communities with their animators of the faith guiding them. On Sept 13,1970 a military coup occurred. All of our projects were halted. We had to wait. Fortunately we kept our torches burning. We shared our food so that no one would go hungry, we continued educating the children in the homes, we maintained the prayer life of the community. It took 17 years for the dictatorship  to end. We could celebrate once again the freedom of the children of God.

I now live in Houston, Texas and am a member of the Mission Council of the Archdiocese of Galveston-Houston. We promote mission awareness among the people who live along the U.S.-Mexico border. There are numerous groups involved. We set up twinning relationships between parishes in the interior of the State and along the Border. We have several medical missions to attend to the 50 percent of the people who do not have medical coverage. We repair hundreds of mobile homes that are located in thee "colonias" along the border. We proclaim the Kingdom of God. We look out across the Rio Grande River to see the fence that is erected to separate our countries.

The U.S. Catholic Bishops have called for comprehensive immigration reform. We join with them in struggling to bring this about. We keep our torches lit. We maintain our hope that these fences will come down. That we will build bridges to live as neighbors once again.

The wall came down in Germany, freedom was restored in Chile. We keep our eyes open for this separation to end on our Southern Border. May we be the watchful bridesmaids awaiting this day.  We keep our torches burning.