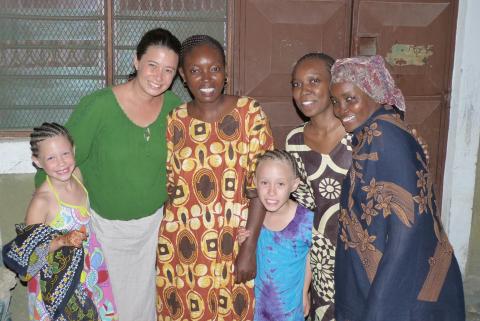 When Jesus came to the place, he looked up and said to him, "Zacchaeus, hurry and come down; for I must stay at your house today." ... Zacchaeus stood there and said to the Lord, "Look, half of my possessions I will give to the poor; and if I have defrauded anyone of anything, I will pay back four times as much." (Luke 19:5-8)

During Christmas 2006 our young family was living and working as missioners in Mombasa, Kenya. Some fellow Maryknoll missioners were visiting and we had bought some fresh ocean fish to cook for dinner. The fish turned out to be not-so-fresh and our dinner was spoiled. We quickly went to the duka (a closet-sized food store) along the dirt road next to our house where we bought a few vegetables and shared our unfortunate story. Within a half an hour, the materially poor family, who owned the duka and lived without electricity and running water, showed up at our door with a bowl full of pilau, a delightful East African dish of meat, rice and spices. The hospitality of Kenyans is amazing, and was beyond our initial expectations.

Upon our arrival as missioners in East Africa, I was expecting that there might be some initial resentment towards white westerners. After all, the continent has a long history of being exploited for its resources and its people. For example most of the national borders in Africa were not decided by Africans but rather by a meeting of colonial powers in Berlin, Germany. This paternalistic and exploitative mentality has continued through the present day – as witnessed in recent decades as the CIA became involved in financially backing a coup in Zaire/Congo and as the U.S. military unfolds its controversial plans to set up AFRICOM in order to train militaries and establish a foothold in the strategically important horn of Africa rather than invest in development.

Far from feeling resentment, the welcoming spirit of East Africans surprised us. In language school we walked through villages and heard “karibu” (welcome) from nearly every household. This was not a general “how are you doing?” but rather a genuine invitation into the homes to spend time with people and get to know them. Peter Majura and Thekla were both students at the local high schools in Musoma, Tanzania where we were placed for language school. Both they and their families invited us to their homes, taught us how to cook traditional foods, shared stories, pictures and culture. While they generously gave so much, nothing was asked of us but to share our own stories. There is a tradition of washing the hands of guests before any meal. The beautiful ritual is just one example of the importance of welcoming and hospitality to all that come into a home.

The hospitality and generosity demonstrated by the Kenyans and Tanzanians is played out in the Gospel story today; while we play the role of Zacchaeus, they play the role of Jesus. Jesus’ followers see Zacchaeus as an exploiter who made his wealth off the backs of the poor. Yet Jesus, sensing his passion and repentance, welcomes Zacchaeus into the fold. But Zacchaeus knows that this newfound faith comes at a cost. He insists that half of his wealth be given to the poor and anyone who has been extorted shall be repaid four-fold! Wow, what a different world we would live in if poor nations were repaid four-fold for the hardships and thievery brought upon them through, slavery and exploitation.

Just as Jesus demonstrated his love for Zacchaeus, the Tanzanians and Kenyans we met were able to look past our nationality and embrace us for our desire to accompany them. This same principal can be applied globally. If we, as a nation, act in the spirit of Zacchaeus, if we drastically reduce our bloated military expenditures ($737 billion according to the National Priorities Project) and instead support efforts for peace and development, the world will embrace our passion and kindness in the way that Jesus embraces Zacchaeus. But like Zacchaeus our faith demands a change of behavior. Many have praised the U.S. for spending on average $3 billion a year to alleviate AIDS in sub-Saharan Africa, and indeed it is a step in the right direction, yet it is a paltry amount compared to what we spend on defense. East Africans recognize that North Americans are kind and generous people. Kenyans often told us that they simply wished that the U.S. government were as kind and generous as its people.

A mother in South America was asked which of her 10 children she favored the most, and she replied, “The one who needs me the most.” Our Church and faith call us to a “preferential option for the poor.” A “preferential option for the poor” may seem to favor some and ignore others, but what it emphasizes is that we must be ready to assist those in greater need as our mother/father God above does for her own children and as Zacchaeus realizes for himself. This change of behavior challenges us not only to look at our government systems but also our own behaviors. Zacchaeus did give half of his possessions to the poor but most importantly he sought out a relationship and had a meal with Jesus. We can do this when we seek out relationships that might be uncomfortable for us.

Recently, a friend at church shared a story about walking through the streets of Chicago and passing a homeless man. As he passed, he told the man, “Sorry, I don’t have anything to give you.” The man, in frustration, responded: “A smile costs nothing.” We all -- poor, wealthy, sick, healthy, young or old -- have something to give. This self-giving was evident in our Kenyan neighbors who saved our Christmas dinner and modeled the giving spirit we see from Zacchaeus in the Gospel today. We begin with ourselves and then must continue that change in our relationships and move for change in our world.

Photo of Anita Klueg and children, with three Kenyan friends.