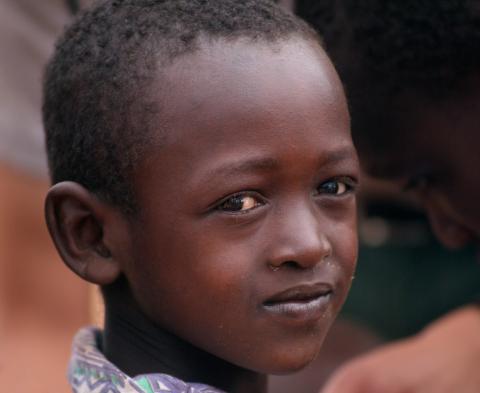 Moses’ hands grew weary; so they took a stone and put it under him, and he sat on it. Aaron and Hur held up his hands, one on one side, and the other on the other side; so his hands were steady until the sun set. (Exodus 17)

Jesus told them a parable about their need to pray always and not to lose heart. (Luke 18)

What remarkable readings for the day the Church has chosen as World Mission Sunday. There could be a number of themes in the readings; prayers, persistence, faith, and, tireless effort. It is the day in which we all are asked to re-dedicate ourselves as participants in the world-wide mission of the Church.

World Mission Sunday! Most Catholics will quickly call to mind the collection plate. I know first-hand that it is impossible to spend 17 years as a lay missioner in Africa without the financial support of our generous and committed donors. I can imagine that many of our donors and other Catholics do see us as the “bothersome widow” who just keeps asking until the weary judge finally gives in just to get her off his back. But the point of the parable that Jesus tells, as the gospel narrator Luke explains, is to exhort us to “pray always,” without losing heart.

The story of Moses on the mountaintop praying to God to help the Israelites in battle is a vivid one. For Moses, his arms raised to the heavens in supplication, was the key to the Israelite victory. But as soon as his strength failed, as soon as he grew tired and his arms sagged, the enemy began to get the upper hand in battle. Aaron and Hur come to his rescue, stand by his side and hold his arms up when he grew too weary to hold them up himself. How many times, over those years, did my own arms grow weary, did I feel discouraged, disheartened? And yet, my arms were held up by so many.

We are all in mission to one another. When we meet one another in prayer, we leave behind our judgments, our prejudices and biases, our seeing each other as so different from ourselves. We come together on a level playing field, hoping for peace, justice, kindness, understanding, health, happiness and so many things that we pray for. We are not only asked to pray for our brothers and sisters in need throughout the world, but they are asked to pray for us in our moments of need, sorrow, despair. We all need our arms held up when they being to sag.

I will never forget one visit home during those years in Africa, speaking to people at a Mass in Spokane, Washington and asking them to pray for the people of South Sudan. “Will you please pray for them?” Many nodded their assent. Some even came to me afterward, in the back of the church and assured me they would be praying. After I returned to Sudan I told the people living there, in camps for displaced people, about this. One by one people came up to me, in awe and disbelief, saying, “Are people in the United States REALLY praying for ME?” They were so happy. I repeated this many times over the next 17 years both in the U.S. and various places in Kenya and Sudan, and the pure happiness I saw when people heard they were being prayed for was palpable: from thunderous applause at a Mass in a slum in Mombasa, Kenya; huge smiles from patients with AIDS in Kitale, Kenya; and so many others.

And, then, September 11, 2001, and a spontaneous outpouring of prayer by the people of Kitale, where I was working then, was given for the people of the United States. The church was packed, most people having walked several miles to get there. Yes, people in a small town in rural Kenya prayed for us, as did many people all over the country and the globe. They came from all over the diocese to give us “pole” (condolences) and to tell us they were praying for the people of America.

To pray and persist without growing weary ...

But perhaps I learned of tireless prayer most poignantly from a 10 year old boy in a displaced camp in southern Sudan during that country’s civil war – a war that dragged on for more than 40 years. We were working in our makeshift clinic and tiny hospital in a camp for displaced people, when the always-feared bomber appeared overhead and suddenly the world seemed to explode. It was over in a few seconds and we began to tend to the badly wounded; then suddenly, without warning, the plane overhead banked sharply and returned and began again. We had barely enough warning to throw ourselves into the trenches that had been dug around the clinics for this purpose. I found myself lying next to a couple of women and several children, lying face down in in the foxholes in terror. “Keep your head down,” one woman told me. “Don’t look up because that is when you get hit by shrapnel and that is what kills you.” I have never felt so powerless in my life -- to not be able to look and see what was happening, as if somehow this would give me more control over the situation. What to do? And then I heard it, the soft, repetitive mantra of the 10 year old boy next to me, calmly, assuredly, “Rabbuna fi, Rabbuna fi” (God is here, God is here). And I found new strength.

How easy it is to forget, in the complex, political, and violent world in which we live, the power of prayer. In the midst of intense, frightening Washington, D.C. debate over a military strike against Syria, Pope Francis called for a day of fasting and prayer. A few days later, new hope for a nonviolent solution surfaced. I truly believe that by asking the world to pause and pray, Pope Francis effected change.

A number of years ago, when I had just returned to the U.S., a fellow missioner came to say goodbye and wanted to do it in the context of a small prayer service. She had brought with her the copy of a song she had heard at a Maryknoll Sisters’ meeting a few days earlier, called “Cradle of the Dawn,” written by Alaskan folksinger Libby Roderick. I play the song often, to this day, to remind myself that we are all “holding each other’s arms up” as we grow weary, no matter where we are or what our particular time of life and circumstance calls us to do.

Sunset in your country, sunrise in mine
Lay down your body, feel mine begin to rise
Sunset in my country, sunrise in yours
I feel you there in the dawn...
The forces facing us are terrible indeed
My hope may flicker in the night
But in the morning I will plant another seed
And while you sleep it seeks the light...
There are no promises that we will see the day
The dreams we live for will succeed
But I can promise you that half 'way round the world
I'll hold the light up while you sleep...

I keep this image of seamless mission near me.

Let us all, baptized “missioners,” continue to pray for each other always and keep the light burning.