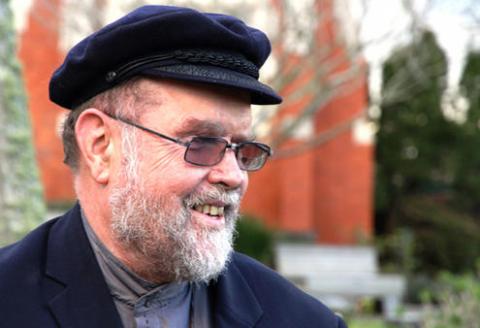 "Lord, if my brother sins against me, how often must I forgive? As many as seven times?"  Jesus answered, "I say to you, not seven times but seventy-seven times.

This verse from today’s gospel reading may be one of the most difficult of Jesus’ teachings to put into action. The life story of South African Anglican priest Michael Lapsley, a friend to many Maryknoll missioners, is an inspiration for forgiveness.

In his memoir, “Redeeming the Past - My Journey from Freedom Fighter to Healer,” Father Lapsley describes his work of healing, justice, and forgiveness in South Africa, Zimbabwe, Lesotho and his own country of birth, New Zealand. He outlines his strong stand against apartheid for which he became the victim of a letter bomb attack in Zimbabwe. Father Lapsley summarized his experience for The Forgiveness Project.

“I had long ago come to the conclusion that there was no road to freedom except via the route of self-sacrifice, but nothing could have prepared me for what was to follow. Three months after Nelson Mandela’s release from prison, I received a letter bomb hidden inside the pages of two religious magazines that had been posted from South Africa. In the bomb blast I lost both hands, one eye and had my eardrums shattered.

“For the first three months I was as helpless as a newborn baby. People have asked me how I survived, and my only answer is that somehow, in the midst of the bombing, I felt that God was present. I also received so many messages of love and support from around the world that I was able to make my bombing redemptive – to bring life out of death, good out of evil.

“Quite early on after the bomb I realized that if I was filled with hatred and desire for revenge I’d be a victim forever. If we have something done to us, we are victims. If we physically survive, we are survivors. Sadly, many people never travel any further than this. I did travel further, going from victim to survivor, to victor. To become a victor is to move from being an object of history to become a subject once more. That is not to say that I will not always grieve what I’ve lost, because I will permanently bear the marks of disfigurement. Yet I believe I’ve gained through this experience. I realize that I can be more of a priest with no hands than with two hands.

“In 1992, I returned to South Africa to find a nation of survivors, but a damaged nation. Everyone had a story – a truth – to tell. In my work I’ve developed a program called the Healing of Memories. Our workshops explore the effects of South Africa’s past at an emotional, psychological and spiritual level. I try to support those who have suffered as they struggle to have their stories recognized.

“I haven’t forgiven anyone, because I have no one to forgive. No one was charged with this crime, and so for me forgiveness is still an abstract concept. But if I knew that the people who sent my bomb were now in prison, then I’d happily unlock the gates – although I’d like to know that they weren’t going to make any more bombs. I believe in restorative justice and I believe in reparation. So my attitude to the perpetrator is this: I’ll forgive them, but since I’ll never get my hands back, and will therefore always need someone to help me, they should pay that person’s wages. Not as a condition of forgiveness, but as part of reparation and restitution.”