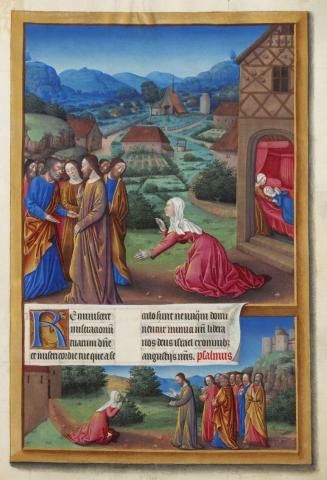 Today’s Gospel (Mt 15:21-28) narrates how Jesus encounters a Canaanite woman. Since she was a Gentile [non-Jew], Jesus, acting in accord with the cultural norms of his day, ignores her plea for her daughter. She persists in her request and the irritated disciples ask Jesus to get rid of her. Although Jesus says that he was sent only to Israel’s lost sheep, the woman does not give up. Again, she requests Jesus’ assistance, humbly comparing herself to the house puppy-dogs who eat the scraps that fall from the master’s table.

At first, we are surprised by Jesus’ seemingly insensitive treatment of the woman. It seems so out of character. Yet, what we ultimately witness is a marvelous display of faith. Her initiative is so persistent and sincere that it attracts Jesus attention and love.

The woman is willing to sacrifice herself and her dignity for the sake of her suffering daughter. Jesus says to her: “Woman, you have great faith. Let your wish be granted.” A Canaanite girl is healed because of her mother’s faith!

Quite frequently in the Gospels Jesus praises the faith of foreigners, non-Jews, outsiders and Gentiles. When the Roman centurion asks Jesus to cure his servant and says: “I am not worthy to have you under my roof,” Jesus exclaims: “I tell you solemnly, nowhere in Israel have I found faith like this” (Mt 8:5-13; cf. Lk 7:1-10).

Jesus cures the woman with the hemorrhage, telling her: “Courage, my daughter, your faith has restored you to health” (Mt 9:22).

Conversely, Jesus often questions the little faith of his own disciples: “Where is your faith?” (Lk 8:25). He says: “You men of little faith” (Mt 6:30; 8:26). Honestly, faith is often found in surprising places but not always found in presumed or expected places!

Some years ago while I served in a parish in Mindanao, southern Philippines, I had a powerful “faith experience” from an unexpected source. It involves Catalino, a man of about thirty years who only had the mind of a child. He liked to visit the parish rectory and no one objected to his presence. He was friendly, liked to talk to everyone, and never caused any disturbance.

Catalino would often ask me for some bread, cookies, or crackers, especially if he saw me come home from the nearby bakery. He normally was present at Mass and would always reverently go to communion.

One day, after I was in the parish for some months, I decided to ask: “Catalino, when you are in Church and go to get something to eat, what is that? Is it a special cookie or cracker?” Immediately, he responded to my question: “Oh no, Father. That’s Jesus!” There and then, all my doubts were resolved. I had no more reservations about giving communion to Catalino! I was deeply humbled at his genuine expression of faith!

A few weeks ago while I was waiting in traffic in the city of Manila, I was deeply moved by a scene on the sidewalk. There, in the shade of a dilapidated building, I saw two elderly people, probably husband and wife. Their total attention was focused on a small crippled young girl in a make-shift wheelchair. The grandfather was patiently spoon-feeding the girl, who obviously had a difficult time swallowing the food. The grandmother never stopped fanning her darling little girl to help relieve the oppressive Manila heat (and the pollution caused by the dense traffic). With her other hand, the grandmother stroked the girl’s head and arm.

The scene exuded tenderness, caring, commitment, compassionate service. Jesus’ words at the last supper spontaneously came to mind: “Love one another as I have loved you” (Jn 15:12). “You should wash each other’s feet. As I have given you an example, you must copy what I have done for you” (Jn 13:14-15). Yes, I felt that I was witnessing a sacrament, a “eucharist”—right there on the lonely sidewalk! Indeed, this was a moving experience of a “street-side Eucharist”!

I offer this prayer: “Lord Jesus, as you marveled at the faith of the Canaanite woman, help us to have eyes to see the faith of so many ordinary people in the daily events of their life!"