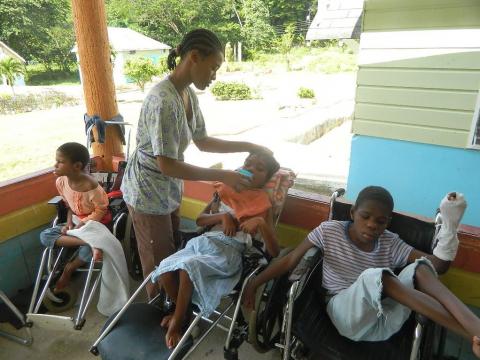 In today’s gospel by Luke, Jesus challenges us to “sell [our] possessions, and give alms.”

If we live up to His counsel, we will be considered blessed servants.

Luke writes that “the master” will come and serve us at table for being vigilant and prepared. Simply, Jesus promises to share His gifts with those who have shared their gifts.

I have two stories to briefly share with you from my recent personal experience in Jamaica, West Indies and one similar story from Maryknoll, New York.

Jamaica is truly a blessed place. Tourists speak about the land’s beauty. They rave about the peaceful coves and picturesque waterfalls. The original settlers, the Tainos people, named the island “Jamaica” which means “land of forest and water.” In colonial times, an abundance of sugar cane and rum were produced from the good soil and sweet water. Today, each morning children can be heard singing from the school yard the national anthem, “Jamaica, Jamaica, land we love.”

However, over the centuries, the Caribbean island hasn’t been kind to her people. The Tainos were exterminated by colonial conquerors. The largest slave rebellion in the British Empire took place in Montego Bay. When it was put down, the British executed hundreds of slaves in the city square which today is named for Sam Sharp, the leader of the uprising. Over the years, thousands of young Jamaicans have migrated away, seeking employment and safety from violence.

Yet there are stories of planting and harvesting the land by faith based communities in order to sell and to give to those who are in need. Near Clarks Town in the parish of Trelawney, a sugar cane community, the Catholic church runs Blessed Assurance, an orphanage where I have worked. In one area of Blessed Assurance’s five acres, we started an organic garden not only to feed the children with healthy fresh vegetables, but also to sell organic food to local tourist restaurants. Tourists are unknowingly supporting the orphanage by eating the organic garden food.

Jesus challenges us today to sell and to give alms to those in need. Our organic garden nourishes the children and generates income. The organizer of the garden, Janice Duhaney, had led the Jamaican delegation to a Slow Food Conference in Italy. Slow Food is a spiritual movement to plant and harvest organic food and to slowly cook and quietly eat as a family (as opposed to “fast foods.”) Janice has her own organic farm several miles from the orphanage which was a sugar cane field. This grassroots effort is reflected in Pope Francis’ eco-remark, “We have to assume the challenge of contributing to a new ecological wisdom to understand man’s place in the world and respect the very man who is part of the world.”

In Savanna la Mar, which is surrounded by sugar cane fields and struggling villages and where in 1930 the largest Jamaican labor strike took place, St. Joseph Catholic church, staffed by Franciscans, has made unused church lands available for farming. Several acres of land are producing fruits and offering employment. A plan to include other unused church lands is being designed by the Diocesan Commission of Justice, Peace and Environment.

For these two small Christian communities, the orphanage and parish land, also reflect the spirit of Jesus. If we “sell ... and give ... an unfailing treasure in heaven” will be ours.

Finally, since 1999 I have had the good fortune to see the development of Pachamama Farm on unused church property at Maryknoll, New York where I have lived before working in Jamaica. Today they annually produce nine tons of food for six food pantries. (Pachamama is a word from the Aymara and Quechua languages which means “mother earth.”)

One facility, called the Lord’s Pantry, was founded by Joan McGovern. When her son Tommy – one of 13 children – died of HIV, she turned a painful loss into a positive project: She established the Lord’s Panty to feed HIV patients in and around White Plains, New York. Now another son comes each week to Pachamama Farm to pick up food for the people suffering from HIV and delivers the food to the homes of these sick residence of White Plains.

Mary Murphy, a Maryknoll Affiliate who founded Pachamama Farm, has said, “The earth nourishes not only people it feeds, it nourishes the people who work the land.” The workers who are God’s servants have their hearts in the right place with those who are poor, sick, orphans and unemployed, namely, God’s little ones. We are truly blessed today by Jamaicans, people in the U.S. and other men and women who creatively sell what they produce and give.

Pope John Paul II warned, “The earth will not continue to offer its harvest, except with faithful stewardship.” May our compassion for others and our noble and generous usage of our land reflect always Jesus’ vision revealed in today’s gospel.

Photo of caretaker with children at Blessed Assurance orphanage, Jamaica