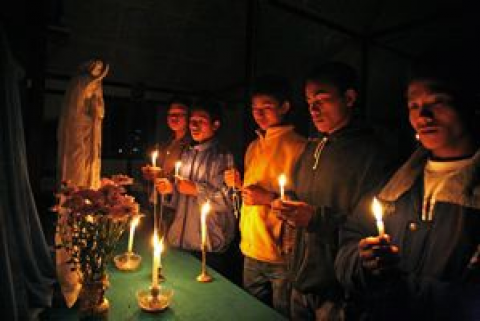 The story of the punishment of Sodom and Gomorrah is associated in the popular imagination with sins of the flesh, though both Isaiah and Ezekiel attribute it to sins of social injustice. However, the passage in Genesis today is not about that, but about a question that arises to trouble biblical authors time and again.

Coming out of cultures in which divine justice was seen to be visited upon an entire people or group for their misdeeds, how a just God could also punish the innocent among those populations vexed them.

That God is willing to spare an entire evil-doing society if a handful of just people could be found was an advance in the religious thinking of the time.

We like to think we have moved much further ahead in our own understanding of collective guilt, but one has only to listen to some 24-hours news pundits rant about Islam to know we can be as merciless as the gods of Canaan.

Hundreds of thousands of civilians died in the war in Iraq. Scant mention of them can be found in the press now. Do we move on as if it is the just cost of removing an evil ruler and his cohorts from power to allegedly protect ourselves? It seems the inverse of what the God in Genesis reveals about mercy.

The reading from Colossians was written to reassure Christians there that God did not require anything other than faith in Christ to save them. They were being confused by teachers who claimed they had to follow Judaic law (the bond) before they could be worthy. Religious tenets then, as now, can be used to mislead: For instance, the Cornwall Alliance for the Stewardship of Creation says climate change is merely a passing cycle in God’s plan, while elsewhere women can be stoned for alleged adultery.

Luke’s passage on prayer states some things so familiar to us that we may miss the points made. For one thing, like much of Luke, it reflects faith living under the Roman Empire. Rome ruled as all empires do by the exercise of power, whether by political savvy and accommodation or by brutality and genocide. They could negotiate an arrangement with the Temple hierarchy at one time or crucify thousands of Jewish rebels at another. It was all about maintaining the rule and wealth of Rome.

So when Jesus teaches his disciples a prayer that calls for the coming of God’s reign, it is in distinction to Caesar’s. Love and nonviolent relationship were not other-worldly pious beliefs but rather the practical path to transforming what the empire had wrought. Do we think in such global terms when we say “thy kingdom come”?

Further, God’s mercy to the disciples is linked to their forgiving others’ debts—another call to radical praxis in a society in which debt was widespread. Most peasants in Israel were subsistence farmers and had to borrow to pay Roman taxes. As debt grew, they might sell some of their children into slavery to save the family. Today’s financial system is much more sophisticated. Whole nations become slaves to indebtedness to transnational banks. Debt cancellation today is a matter of life and debt on a scale unimaginable to the gospel writers.

What may truly elude us, however, is how Jesus takes the disciples’ request for how to pray for something and totally redirects it. The point of the story of the man whose neighbor comes asking for bread for a guest in the middle of the night is really not about annoying God until we get what we want. Luke ends with Jesus saying that what will be granted is the Holy Spirit.

It is the same line of thinking that calls us to seek first the reign of God. Often we may feel overwhelmed in the face of the injustice, violence and environmental destruction. Where could the Spirit be in the midst of it all? God reigns over this?

Going back to Genesis, I think we can find a merciful God manifest to us among those whose suffering at the hands of U.S. corporate power and foreign policy does not keep them from warmly welcoming us. At least that has been my experience as a filmmaker trying to capture their stories. I don’t feel at all like one of the 20 just ones, but it seemed to make no difference to them.

I think of Filipino farmers whose fields have been contaminated by the tailings from a U.S.-owned gold mine. The U.S. corporation owned the roads that led into their village, even the airspace above the monstrous open-pit mine. Yet they welcomed us as friends and shared a meal as they spoke passionately about how they would one day cleanse their land for their children.

I think of being privileged to attend a Mayan peace ritual in Guatemala in which we were blessed along with all of God’s creation. I cannot begin to conceive from where the strength came to give such a blessing in a region that had been wracked by massacres by U.S.-funded military. We met women in a weaving collective, all of whom had lost their spouses in the repression. They were looming their way into the future with hope, despite what had happened.

The reign of God, to paraphrase another passage, is among us when we open our hearts to such encounters.