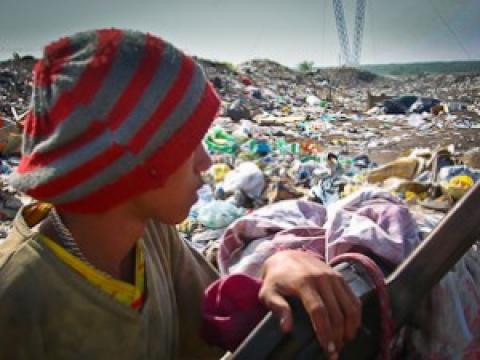 In today’s reading from his second letter to the Corinthian community, Paul calls on the group to continue its generosity in giving to the original Christian communities. Earlier in the letter, he writes of how generous the community in Corinth had been in the past even though they were poor and “in the midst of a very severe trial.” I think this is a common trait of strong Christian communities today: a sense of abundance even in times of material want.

I am reminded of the church community in the city dump in Joao Pessoa, Brazil. I served as a Maryknoll lay missioner there, living alongside hundreds of men, women and children who separated out recyclable materials from the massive city dump that served a population of more than 600,000 people. Day and night people would work in grueling circumstances (heat, smoke and dust in the dry season; mud up to your knees during the rains) to earn a living. They worked long hours making cents for every kilogram of paper, plastic, metal or glass they pulled out of the waves of trash pouring out of loud garbage trucks.

A group of sisters from Italy organized a small church community in a chapel called “Virgin of the Poor” at the end of the road in front of the dump. It was here that many of the children who worked in the dump learned to read and write and where their families went to church. One year, the diocese had a special push to increase participation in tithing to the church. Many materials were produced and homilies focused on generosity and tithing for many weeks. To further encourage participation, statistics were kept to see which parishes had the highest participation based on income. Week after week, many were shocked to see that our little Virgin of the Poor community, long considered too poor to even participate in the tithing program, was consistently one of the top giving communities, giving a larger portion of their combined incomes than others.

One reason I think that people with less economic wealth are more generous is because they are better able to see how material things do not provide security. Not to glamorize poverty, because there is nothing glamorous about being poor, but while living in the dump I saw a real advantage in having fewer material things – you are able to see God’s actions in your life much more easily. Many times, I think, we in the U.S. and other rich countries come to have cluttered lives and begin to place our faith in items like retirement plans, houses, jobs, etc. Yet we see, even more vividly now with the recent economic crash, that none of these things is permanent or trustworthy.

Members of the Virgin of the Poor community were proud of their generosity with many saying that no matter how difficult life may be, there are always others who need more. Many almost directly quoted Paul’s phrase in today’s second reading: “Your present abundance … [should supply] their need, so that their abundance may be for your need, in order that there may be a fair balance.”

“I have received help from the Church and know that I can count on their help when I need it, so it just makes sense to give to them when I have a little extra,” said Mr. Santos, a longtime resident of the dump. “There are always others who need it more than I do and no one should ever go hungry in this rich world.”

Since the beginning, Christians have given to their communities in order to provide for the needs of all. “All the believers were together and had everything in common. They sold property and possessions to give to anyone who had need,” we are told in the book of Acts. This was the way Jesus organized his community as well as a way to ensure that all were cared for. In recent years, scientific research into happiness confirms that people are happier when living in communities and countries where there are higher degrees of social equality, where fewer are left out.

Allow the generosity of the Virgin of the Poor community in Brazil and the lessons of materially poor communities around the world help challenge you to go further in simplifying your lifestyle and giving more from what you have. It will not only benefit those who receive your gifts, but help create a happier, more peaceful society.