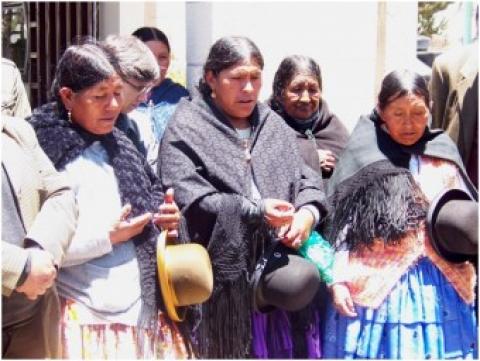 Today’s readings are stories of courage and faith and hope in the midst of persecution. And they carry a blessed reminder for us that no one, not the smallest or lowliest creature, goes unloved or unheard by the God who brought all of us into being.

In this chapter of Matthew’s gospel, Jesus is giving some challenging messages to his beloved apostles as they head into mission: their lives will be hard and frightening; they should not expect to succeed. These followers of Jesus knew that they would not likely be welcomed by those with power and influence. Their path would be a lonely one and likely a dangerous one.

Norbert taught me the meaning of this story, and so did Lucia when I was their neighbor in the rural village of Amachuma on the outskirts of El Alto, Bolivia. They showed me what it means to be faithful in the midst of persecution.

When we arrived in Bolivia in January 2004, the neighborhoods of El Alto were still reeling from a brutal massacre committed against unarmed protesters by their own government. Tensions that had been building for many years found a focal point in the Bolivian government’s decision to sell its natural gas to multinational corporations through a port in Chile. The country’s indigenous people had had enough—their own natural resources were regularly being sold at rock bottom prices to wealthy foreign investors under contracts that left nothing for investment in the health and wellbeing of Bolivia’s own people. The indigenous majority were living in grinding poverty while a few wealthy families lived like kings off of what should have been shared among everyone.

When these contracts were announced, young people, mothers with children and elderly people took to the streets to literally put their bodies and debris in the roads, to block the passage of the gas trucks hauling the fuel to Chile. With this simple, brave, coordinated action, the impoverished residents of El Alto managed to shut down the country.

The government responded with tanks and soldiers and snipers perched on rooftops. In the sad irony of poverty and militarism, the young men in soldier uniforms carrying outdated weapons were the sons and grandsons of the very people confronting them in nonviolent protest on the El Alto roads.

In our village of Amachuma, the people organized to do their part in this massive campaign. This community of potato farmers and shepherds endured the terrible toll of the ensuing blockades to do their part for what they hoped would be an economic and political revolution. They were scared, and they had much to lose, but they knew that they could no longer tolerate the humiliating oppression that had shaped their lives for so long.

One day, on the road where our village road met the highway, our Amachuma neighbors stood together in front of a line of armed soldiers. When shots were fired, two young people were struck—one through the shoulder right near his heart, and one into her leg.

Norbert and Lucia were two of the more than 400 people wounded during those chaotic days of September and October 2003. Today, they live with the chronic pain and diminished physical capacities caused by their injuries, which make it difficult to do any physical work. Their appeals for government assistance remain tied up in exhausting bureaucratic processes.

But Norbert and Lucia, and the 80 innocent people who died in the massacre, and the thousands and thousands who stood with them, have won for themselves a more just society. They did not know it at the time, but their protest wrote a new chapter in Bolivia’s history, a history that is now being written by the country’s first indigenous president, and the social movements that brought him to power. The nation’s natural gas now yields an 80 percent profit for the Bolivian people, and this wealth is being invested in schools, and roads and health care facilities in remote rural communities.

I am left in awe and wonder at the courage of these hard working people. How did they find the strength to face such extraordinary risks, knowing that their own government was ready to kill them for daring to disrupt their greedy dealings? And what sustained them through the sad and terrifying weeks of this ordeal?

My neighbors in Amachuma bore witness to me of the meaning of this Gospel. They showed me what it means to be courageous in the face of real danger, to hold fast to the truth and to a vision of a more just society. To trust in God and do what is being asked of us in that moment.

I am left with powerful questions for my own journey of faith. What would call forth such courage from me? For what am I willing to offer my own life? What is holding me back from saying yes to all that justice and love demand of me?

I am back in my own land, now, among my own people, and facing the wrongdoing of my own government and corporations. Will I take heart and trust in God, and follow the example of my neighbors in Amachuma? If Norbert and Lucia, who had everything to lose, can take up this missionary task, I will find the courage to do so as well. There is much work to be done, and I must do my share.

Photo from the Democracy Center shows mourners on the 10th anniversary of the September-October 2003 protests, visiting the graves of their family members who died during the conflict.