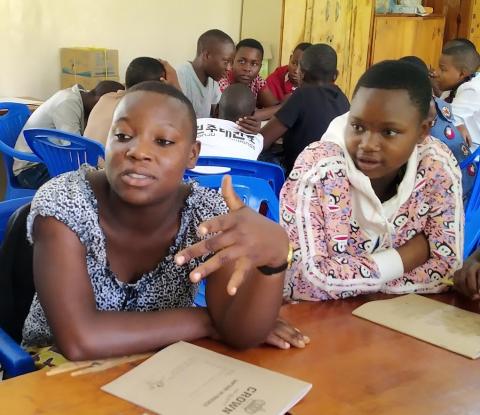 Although I am not a fan of violent battle tales, today’s first reading contains a lesson we need to be reminded of: we need each other.

In the book of Exodus, we’re told that during Israel’s battle with Amalek, Israel had the better of the fight only when Moses kept his hands raised. But no leader can lead alone. As Moses grew tired, Aaron and Hur, supported his hands, one on each side. The battle was won.

God could have used another strategy, but he chose for the victory to be gained through cooperation and support. For those of us who pride ourselves on being independent, acknowledging that we need help can be difficult.

One thing that I have learned during my time as a lay missioner in Tanzania is that we can’t make it on our own.  We need each other.

At Uzima Centre, a health and social services center for people living with HIV in Tanzania, Gaudensia is a member of our support group for teens. When her stepfather kicked Gaudensia’s mother and the children out of the house, her mother took the younger children and fled to the village; but Gaudensia was in her last year of secondary school. She came to us in tears, not knowing what to do.

I’m sure that the words of today’s psalm “whence shall help come to me?” would have resonated with Gaudensia. Just a few months away from graduating, she feared that she would have to drop out of school. She had faced difficulties before, but this was more than she could handle.

I remembered that Gaudensia had a friend, Dorothea, who had been living with her grandmother, Martha, who is one of our HIV+ clients. Dorothea had recently moved out. Would Martha be willing to take in Gaudensia?  It turns out she was more than willing to help. Gaudensia now has a safe place to live, and Martha has someone to help her. It is a win-win situation.

Martha explained that this is not the first time she has taken in a young woman with no place to stay. Martha’s “yes” was God’s way of looking out for Gaudensia.

To believe that “The Lord will guard you from all evil; he will guard your life. … both now and forever” isn’t always easy. But God’s plan for meeting our needs requires the involvement of other people. Like Martha, we need to say “yes” to those who need our support. St. Teresa of Calcutta said, “If we have no peace, it is because we have forgotten that we belong to each other.”

Both the second reading and the gospel focus on the importance of being persistent.  I have been impressed by the persistence of some of the young people I work with. They face endless challenges, and yet, like the story of the widow’s dealing with the unjust judge, giving up simply is not an option.

I remember a boy named Adam. When he was still in primary school, his mother died. Adam’s grandmother took on the responsibility for raising Adam and his four brothers. Determined to someday become a doctor, Adam always signed his name “the future Dr. Adam.” He managed to get into high school, but the school had no teachers for physics and chemistry. We helped him to purchase textbooks and he set out to teach himself.

God always makes a way, but God never promises that it will be easy. Adam persevered. I’m happy to share that he made it through medical school and is officially “Dr. Adam.”

I have seen again and again that the first step to success is to believe that it is possible. We must trust that our God is a faithful God who will not abandon us. God can and will make a way, but that “way” almost always involves other people. Aaron and Hur were there for Moses when he grew weak. Martha was there for Gaudensia when she was homeless. Let us keep our hearts open to how we too might be that “way” for others.

Photo: Gaudensia and Irene share their thoughts at a meeting of the teen group at the Uzima Centre, Tanzania. Photo courtesy of the Maryknoll Lay Missioners.

Joanne Miya joined Maryknoll Lay Missioners in 1983. She is the director of the Uzima Centre in Mwanza, Tanzania, whose mission is to provide hope, healthcare and education to adults and children living with HIV.