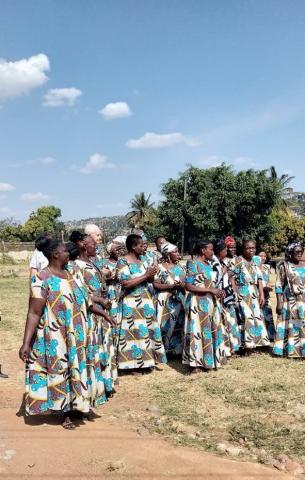 In Transfiguration Parish in Mwanza, Tanzania, a group of widows came together to initiate a support group for themselves. Called “Upendo wa Wajane,” (Widows’ Love), these roughly thirty-five women have joined together in a cooperative. They invest, borrow, and distribute to economically support one another.

Additionally, they meet regularly, and care for one another in sickness and at times of deaths and grieving.  Most of them have small street side businesses which were started with loans from the cooperative, and once a year they distribute to themselves profit gained from interest on those loans. Fr. John Eybel, a Maryknoll priest who is a member of the cooperative and their chaplain says, “It is such a privilege for me to participate with these wonderful women each week in their beauty and in their vulnerability.”

Traditionally in Tanzania, widows exemplified marginality. They had very little voice over their own destiny. Usually, they were inherited by a brother of their deceased husband and remained in the family primarily to continue to give birth. But, if a widow chose to step out of this tradition, she basically lost all her support system and became very vulnerable economically, politically, and socially. Hence, when a major catastrophe happened like an extended drought, a cause had to be found. Diviners were called in to help identify the evil person or persons whose behavior had caused the calamity. And this led to many “witches” being identified and killed who were simply the weakest – the widows.

This brings us to today’s readings, in which the central characters are widows. In the stories, the two widows are facing death by giving all of what they have.

This portrayal must be placed in the broader context of the Gospel of Mark. The author of Mark wishes to show who Jesus is and who Jesus’ followers are expected to be. To do this the writer arranges the characters of his story; he paints extreme cases of foes and exemplars as the background against which the expectations for his followers may stand out more boldly. The foes and exemplars are similar in their one-sided characterization; they differ in their value as models for the audience.

Mark describes the enemy of true discipleship as the scribes, of whom there is nothing good to say: “they devour the houses of widows.” On the other hand, in today’s Gospel, the widow is the icon of a disciple. She is the exemplar of the positive model of discipleship: “she put in [to the temple offering] everything, all she had to live on.”

The scene is a teaching moment for Jesus. He summons his disciples to attend to the actions of those giving to the temple treasury and points out the exemplar. Through this moment, he attempts to persuade his disciples to his self-expectation and his expectations for a true disciple. The historical reality of widows’ lower status and the historical reality of their discipleship together support in Mark’s Gospel the narrative reality of women characters who exemplify the demands of followership—from bold faith in Jesus’ life-giving power to self-giving in imitation of his self-giving death.