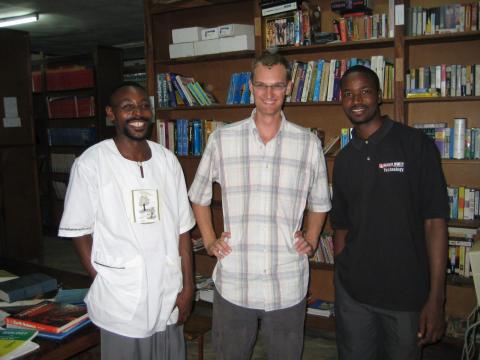 Steve Veryser, a Maryknoll lay missioner in Tanzania, reflects on how we can live out the greatest commandments.

Happy Halloween! There are not many years that Halloween falls on a Sunday. In my childhood trick-or-treating days, it didn’t at all. The 31st of October was a Sunday only in 1982, when I was just two, and 1993, when I was already in high school.

There seems to be a fair bit of hand-wringing on those years when the Lord’s Day does coincide with the ‘spooky’ celebrations of Halloween. Many municipalities reschedule trick-or-treating to another day, like the day before on Saturday. I have to admit that I volunteered to write the reflection for the today for the sole fact that Halloween is my favorite holiday. I figured, though, that I might have to choose between writing about the readings, or the secular holiday – but I was wrong.

Of the readings, the Gospel usually speaks to me the most, and among today’s readings it was no exception. As I read the Scribe’s questions for Jesus about the greatest commandment, it dawned on me that more than any other holiday, even the seemingly religious ones, the activities of Halloween put loving one’s neighbor in action in a very literal sense. It’s the one day of 365 in which U.S. Americans are allowed and expected to trust strangers, to go around the neighborhood after dark knocking on each-others’ doors, and in scary and creative costumes at that. We give small gifts to kids that we mostly don’t know, and many whom we may never see again. In many neighborhoods, it’s the most physically communal we are with folks that live near us.

I think my other attraction to Halloween is similar to my attraction to mission.  Both are an opportunity to ‘be someone else,’ to try something new for a day, or a year, or many years. To go on a journey, even if it’s a short one. Curiosity satisfied.

When I arrived in Tanzania, first as a teacher in the U.S. Peace Corps some 18 years ago, I wanted nothing more than to be accepted by the community as a fellow Tanzanian. I put on a Tanzanian ‘costume,’ in terms of language, clothes, culture, housing, mode of transportation, even financial means.

The Peace Corps asked us volunteers to trust that the material risks we took, in terms of security and privacy, would be repaid with hospitality, trust, friendship and acceptance from the communities that hosted us. I lived in a one room teacher-house, shared meals with the family who lived in the even smaller house next door, went out for beers with fellow teachers, played soccer with students, crammed myself (often standing with my neck craned because the seats were full) into public transport minibuses, and attended Mass on Sundays with students and teachers in a classroom. I also got robbed, had malaria, and fell in love (not, necessarily, in that order). It was fun, and challenging!

The Peace Corps was right about both the risks that had to be taken and how we would be received in communities for taking them. What I didn’t expect was that my life was not only changed in the short-term, but forever. After wearing the ‘costume’ for a few years, I couldn’t just take it back off again.

I’ve often struggled with that first, greatest, commandment. While loving one’s neighbor can be hard, and loving one’s enemy harder, at least the meaning is clear. What does it really mean to love God, “with all your heart, with all your soul, with all your mind, and with all your strength?” I wonder, in faith, how is the vulnerability that Christ asks of us similar to the vulnerability that was asked of me in Tanzania? What are the risks God is asking me to take and how will my life be changed forever for taking them? Am I ready to accept the same hospitality, trust, friendship and acceptance that God offers in his love for me?

Photo of Steve and colleagues in Tanzania courtesy of Steve Veryser.