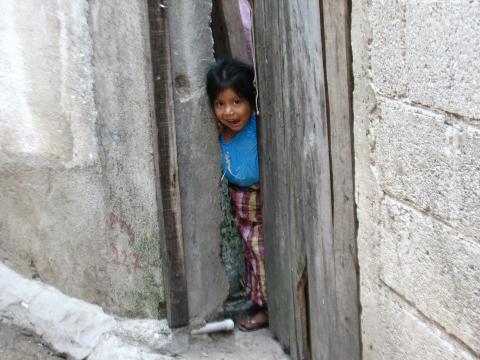 Maryknoll Brother John Blazo reflects on lessons learned as a missioner being with people in need in Guatemala and Nicaragua.

The reading from Sirach tells us that, while having no favorites, God listens to the voice of the poor. The orphans, widow, sick and materially poor get God’s attention. Pope Francis says the life of Jesus “reminds us Christians that we are called to care for the vulnerable of the earth. But the current model, with its emphasis on success and self-reliance, does not appear to favor an investment in efforts to help the slow, the weak or the less talented to find opportunities in life.” (Evangelii Gaudium, 209)

Besides giving direct help to those who are poor (charity), I gradually learned through my years as a Maryknoll missioner in Guatemala and Nicaragua that I also needed to get to the root of the problem (justice) in order to solve it. When I returned to the United States, I realized we often focus more on the charitable response here.

I am reminded of a young girl in Guatemala whom, from time to time, I gave a few dollars when her mother sent her to my door. One day, I drove the girl home to meet her mother and we had a nice visit. Her mother dreamed of selling fruit drinks in the marketplace, freeing herself from needing to ask me for help. She told me what she needed to launch her business. I bought it and from that point on, she and her daughter never asked me for money again.

As a follower of Jesus and as a foreign missioner, I came into contact with all kinds of people in the town of Poptun, in the Petén area of Guatemala. It was a small town of various economic classes of people, as well as a major military base on the outskirts of town. It was easy to see the relationship of three powerful groups there: the military, wealthy class and the Church.

Therefore, being respectful to all was a key principal and, at various times, I used the Church’s influence to help poor sick people, especially those who came to me saying they couldn’t get any medical help at the local clinic. With my presence, the medical staff did help them.

The second reading from Timothy is a wonderful reading of Paul’s background as a missioner constantly going out to others and not being content spending his time and effort only with those who heard the Gospel.

My time in Guatemala and Nicaragua and in the United States was and is regularly going out to other locations to help others reflect on things from a missionary point of view. Recognizing that mission is a two-way street, I also am impressed by the many ways the People of God are living their faith in churches and schools amid such changing and challenging circumstances of our Church and society.

As Saint Paul went place to place, he emphasized another key point about mission: the need for relationships with all kinds of people. As I visited many villages in Guatemala and Nicaragua getting to know personally many people, including Don Lolo who was a carpenter and prayer leader, Dona Mencha, a shopkeeper, and Carlos Stwolinski who worked on the local Army base and was president of our parish council, I could see how building those relationships gave us all confidence to work together and confidence to disagree at times.
The gospel reading for this Sunday is challenging because the temptation of professional clergy is to slip into the Pharisee professional clergy role.

It’s so good to know that Jesus will be our ultimate judge after our lives, with all its ups and downs, are over. As a young Brother and after so much study in Maryknoll, I thought I knew all the answers. I often saw things in black and white and made my comments and decisions accordingly.

However, as I got older and learned the language and culture better, and built relationships with people, I realized the error of judging and realized that Jesus judges. It took a tremendous load off my mind.

I remember visiting the Nicaraguan village of Santa Maria in the mountains where I followed the lead of the people in the prayer service and was asked to visit a woman dying of cancer. While with her, I began the ritual for praying with the dying and along with some family members, I led them in prayer. As I went through the prayers, I realized I was moving from saying the prayers to being in prayer with the woman and her family. What a difference it made in me.

The prayers requested that Jesus show His mercy and love for this woman despite any sins she may have committed in her life. The sincerity of the people taught me to be with people and with God in prayer.