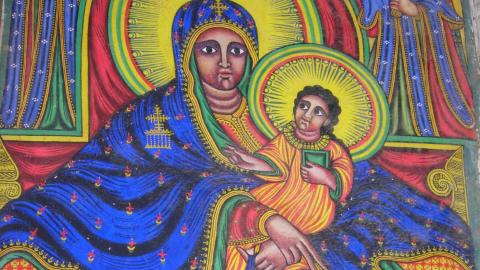 Since 1969, the Solemnity of Mary Mother of God has replaced the feast of the Circumcision of Jesus. Eight days after the Nativity, the parents of Jesus, described by Luke as observant Jews, had him circumcised according to the law of Moses. The honoring of Mary as "Mother of God," a derivation from the Greek Theotokos ("God bearer"), is traced back to the fifth century Council of Ephesus and represents a celebration of Mary's motherhood of Jesus. Luke tells us that the events leading to her motherhood were treasured by her and "pondered in her heart" (2:19).

Inspired by the papal encyclicals "Pacem in Terres" and "Populorum Progressio," Pope Paul VI, in 1967, declared January 1st as World Day of Peace [WDP]. Thus began an effort to involve the church more actively in working to bring about a genuine global peace. As Pope Francis wrote in his 2022 WDP statement, "In every age, peace is both a gift from on high and the fruit of a shared commitment."

As we begin the new year 2023, some six decades since the first World Day of Peace, our world is still suffering greatly from various manifestations of unpeace. Wars are being fought in Europe, the Middle East, Southeast Asia, and the African continent; peaceful protests are being brutally and forcibly suppressed in Iran and elsewhere; climate related disasters like severe drought in Somalia and tragic floods in Pakistan are causing widespread hunger, thirst, and displacement.

Appropriately, the Aaronic Priestly Blessing is our first reading for Jan 1st. In three sections, the blessing of God is invoked: first for material needs and then for the light of spiritual wisdom. The third invocation combines the material and spiritual prayer requests and crowns them with the blessing of peace:

In the Hebrew, the three invocations ascend gradually to a crescendo as the number of words increases from three words in the first invocation, to five in the second, to seven in the third and final invocation.

The Hebrew, shalom, means so much more than simply a cessation of violence and war. It encompasses well-being in every aspect of human life: the physical, material, spiritual, relational, economic, and political. It is this comprehensive peace that we pray for during the liturgy for this World Day of Peace and exert effort in whatever ways we are capable of bring it about.

Pope Francis proposed "three paths for building a lasting peace. First, dialogue between generations as the basis for the realization of shared projects. Second, education as a factor of freedom, responsibility, and development. Finally, labor as a means for the full realization of human dignity."

To this end, the community responds with a psalm echoing the Priestly Blessing, praying that "God be gracious to us, and bless us; and let his face shine upon us" (Ps 67:2). As the psalm continues the language of praise pervades with the hope that all peoples and nations will praise/thank/bless God in peace: "Let the peoples praise you, O God; let all the peoples praise you. O let the nations be glad and sing for joy . . ." (vv 4-5a). The psalm concludes with assurance of divine blessing. "The earth has yielded her produce; and God, our own God, shall bless us. God shall bless us. . ." (v. 7) to which we all respond, “Amen! May it be so!”