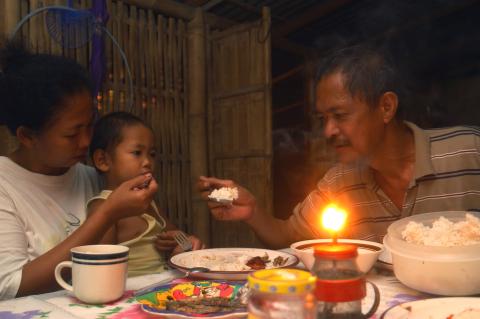 Maryknoll Sr. Helen Graham reflects on the warm welcome she received in the Philippines and the Biblical virtue and duty of hospitality.

Both readings for the 16th Sunday in Ordinary Time focus on eating and hospitality. The story of Jesus visiting the home of Martha and her sister Mary is an exemplary story of hospitality shown to Jesus and his disciples.

Hospitality and eating are significant in many cultures.

My mission experience has been almost completely in the Philippines culture where eating is extremely significant and accompanies any gathering. I often would need to remind my Bible study group that we have come together to study as I attempt to pull them away from the meal.

One experience that sticks in my mind is the time I went with another Maryknoll sister to visit her family just outside of Manila.

We arrived in time for lunch, which we ate at a very long table at which the family, as well as the workers, ate. But, as I was a foreigner and a visitor to their home, it was only the two of us that ate that day, while others peeked at us from the kitchen, ready to serve our every need. If you were to mention that you particularly liked something, you might even get a package to bring home.

Eating and hospitality govern the readings for today. The Genesis reading gives us an extravagant example in Abraham's elaborate preparations for the three travelers who have come to announce the imminent birth of a son to the elderly couple. The opening verse had announced that "the Lord appeared to him ..." (18:1). In effect Abraham, as it were, takes leave of God, in the midst of a divine vision, and runs to meet the guests.

Abraham eagerly invites them to "comfort (their) hearts" with a "morsel of bread" and water for their feet. He then hastens to have Sarah prepare cakes and runs to the herd to have a calf prepared for their meal.

The rabbis praise Abraham for placing a higher value on hospitality above that of the divine presence. Abraham and Martha are among the righteous whom the Psalmist proclaims are worthy to "abide in (God's) tent" to "dwell in (God's) holy mountain" (Ps 15:1).

Hospitality, a biblical and indeed a human value, as exemplified by Abraham and Martha in today’s readings, is under threat today.

In a social environment of hate crimes, cultural and religious conflict, school shootings creating fear in children, violence of extremist groups, violence against women, gender bias, violence against animals, climate change which threatens the food security of millions of humans and other living creatures, mistrust of the stranger, the migrant and the refugee often leading to violence against them, etc., hospitality is severely threatened.

Sr. Helen Graham, MM, is a theologian and taught Sacred Scripture at the Institute of Formation and Religious Studies in Quezon City, Philippines.

Image: A rural family eating together in the Philippines by Flickr/IRRI CC BY 2.0.