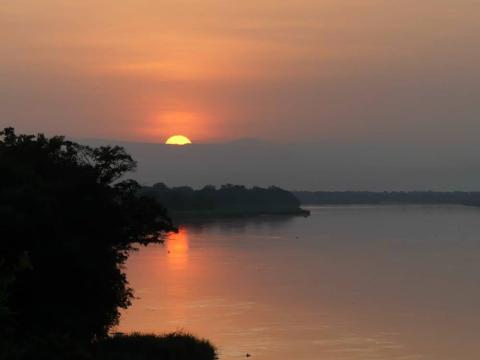 This reflection was previously published in 2017.

This Sunday’s readings tell us that God has chosen each of us and we can put our trust in God.

The first reading from Isaiah says that one is chosen from the time of being in the mother’s womb. Isaiah writes about facing many difficulties while preaching about Yahweh’s wishes to a hard-hearted nation. He trusts that he is proclaiming what God has asked him to say. Isaiah’s prophesies call the Israelites back to God. He also foretells the coming of the Messiah – the leader who will call all nations to follow Yahweh.

The beginning verses of Psalm 40 are also an expression of trust, anxiously waiting, with every fiber of one’s being:

“I waited patiently for the Lord. He inclines and hears my cry. He brings me up out of the pit, out of the miry clay. He sets my feet upon a rock and makes my footsteps firm. He puts a new song in my mouth, a hymn to our God. Many will see; many will see and fear. Blessed the man who sets his security in the Lord, who turns not to the arrogant or to those who stray after falsehood. You, yes you, O Lord, my God, have done many wondrous deeds! And in your plans for us there is none equal you. Should I wish to declare or tell them, too many are they to recount. Sacrifice and offering you do not want; you opened my ears. Holocaust and sin-offering you do not request; so I say, “See; I come with an inscribed scroll written upon me. I delight to do your will, my God; your law is in my inner being! When I sing of your righteousness in a great assembly, see, I do not restrain my lips; as you, Lord, know.”

In the second reading, from Corinthians, Paul also has been chosen. He is in Corinth as God’s representative, to call people to follow Jesus. As we know, Paul was chosen after fighting against and even persecuting Christians, but he was chosen as the apostle to the gentiles and opened up the early church to the wider world.

The Gospel reading retells John the Baptist’s testimony to Jesus, whom he declares is the Son of God. John the Baptist says he has seen a sign – “I saw the Spirit come down like a dove from the sky and remain upon him.”

We can see the theme of being chosen by God not only in Scripture but also in our lives.

I saw it when I was on mission in the town of Nyakato, a suburb of Mwanza, Tanzania. I visited people who were HIV positive and who had AIDS. They faced both physical suffering as well as the suffering of social stigma. They often didn’t want others to know about their disease, but it would become apparent when they were ill for long periods of time.

I remember meeting Francis when he returned to Mwanza from Dar es Salaam, the capitol city of Tanzania. Francis had had a good job in the police force in the capitol, and had risen in the ranks, until he contracted the HIV virus.

Our AIDS outreach ministry first heard of Francis’ illness from his mother who was one of the leaders of the Catholic Women’s Society in the Nyakato Parish. Her sadness about Francis being HIV positive was compounded three times – Francis was her third son to contract the disease.

Francis said that for a period of time he had not been a practicing Catholic, but that when he returned to Nyakato he began to receive the sacraments again. We helped Francis for a little over a year. Usually we visited him at home with a doctor. We would also accompany him to the hospital in Mwanza which was about six miles away. As his immune system weakened and he faced more and more health problems, Francis spoke with me about his faith.

After a time, Francis developed a fungus on his feet that was resistant to medicines. As the fungus spread, he lost the ability to move his legs and became bed-ridden. One day, after months in bed, he said to me, “I know that Jesus suffered terribly during his crucifixion, but my disease has caused me terrible pain for months. Why does this happen?”

We don’t know “why” but with trust in God’s love, Francis was able to endure this long suffering. He found some peace in receiving the sacraments before he died.

Francis was a man struck down by disease in the prime of life. He is an example of someone who, although burdened with unanswered questions, was able to trust that the Lord, as stated in Psalm 40, “sets my feet upon a rock and makes my footsteps firm. He puts a new song in my mouth, a hymn to our God.”

Photo: Sunset on Lake Victoria, Uganda. The city of Mwanza is built on the southern edge of the lake. This photo is in the public domain and available here.