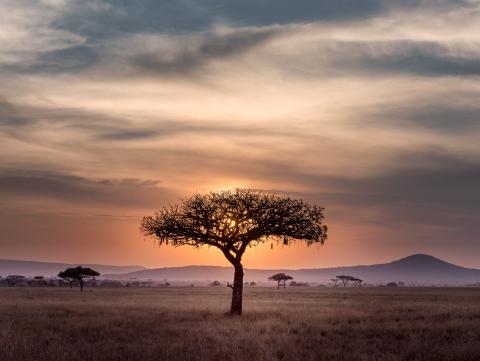 Fr. Frank Breen, who was on mission in Kenya, reflects on finding Easter hope amid the challenges facing our world.

On Easter we celebrate the victory of life over death, something readily apparent this year with Easter occurring in mid-April when blossoms and flowers have sprung back to life after a long winter. Thus, we look for signs of life emerging where we thought death had executed its final blow.

There are two very real examples of death happening in the world today that I wish to reflect on: the war in Ukraine and the devastating loss of biodiversity that our world is facing.

These ancient events were followed by prophecies of resurrection, such as Ezekiel’s image of the dry bones coming back to life, and the replacement of the Temple in Jerusalem with synagogues led by Rabbis, and by the Christian communities that spread throughout the Roman Empire and which believed that the risen Jesus was in their midst.

Will the Ukrainian nation come back to life? We are a people who live in hope, which enables us to believe that evil will be overcome and what was killed – or almost killed – will come back to life. We don’t know what this will mean concretely in the near or far future, but we cannot accept that this is the end. An Easter faith should also bolster our commitment to transforming global geo-political relations to a final determination to eradicate war from each and every country’s set of strategies for pursuing national interests.

The second arena of death present on my mind is the terrible loss of biodiversity our world is undergoing. Two years ago the United Nations issued the alarming report that our planet may lose one million species of plant and animal life in the next one to three hundred years. We have tabulated about 2.5 million species but estimate there are from five to ten million total. No matter the number, a loss of a million ranks as what is called a “mass extinction.” Many of those that will be lost are some of the most iconic species, such as polar bears; Bengal tigers; marine species, including some shark and whale species; plus many others. The report also unequivocally states that human activities are responsible for this, through our destruction of wildlife habitats, hunting, over-fishing, and fossil fuel consumption which causes global warming.

I once met face-to-face two species in danger of extinction: an eland and a rhinoceros. It was at a small zoo in Nairobi, Kenya, called the Animal Orphanage, and one enclosure had a low wall around it where these two huge animals lived. Every day people would come to view them, the two animals would come over to the edge of the wall and visitors would use branches to scratch their backs. As I stood at the wall, the rhinoceros sauntered up to me, stopping just two feet away, and waited patiently for me to start scratching its back. Being eyeball to eyeball with a rhinoceros is assuredly a surreal experience. Those two animals thought humans were great, little knowing that we are causing the extinction of their species.

In 2018, a Kenyan student whom I know was studying to be a tour guide, which included a field trip to the Ol Pejeta Ranch in north-central Kenya. By circumstance she was there when the last male Northern White Rhino died. Two females are still alive and there have been attempts to have their eggs put in other species of rhino to try to preserve the species, but long-term success is dubious.

This is just one species: remember there are one million at risk of extinction. Our generation has been blessed to be able to share this wonderful planet with so many species and as Easter people we applaud the efforts of wildlife officials and many national governments in their preservation efforts.

These examples – genocidal war and biodiversity extinction – raise deeper questions: is our human culture one of death or a culture of life? If the latter, what transformations are required for us to truly cooperate with God’s life-giving activities in our world? Can we commit this Easter to fully recognize the presence of the risen Jesus in our midst and participate in his constant invitation for us to share in his life?