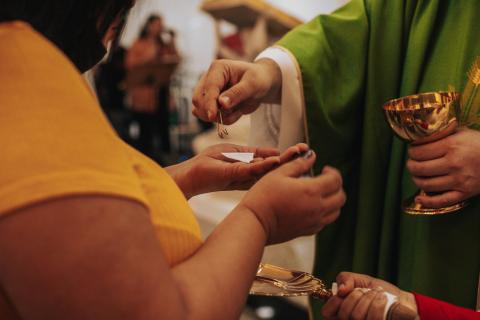 Kathleen Kollman Birch, communications manager at the Maryknoll Office for Global Concerns, recalls the experience of Mass at a shelter for migrants in representing the unifying power of the Body and Blood of Christ.

In the summer of 2015 I lived at the Houston Catholic Worker, known as Casa Juan Diego, which was a house of hospitality for immigrants and asylum seekers. On any given week, between the men’s and the women’s houses, there would be anywhere between 30-100 people staying there, from all corners of the world – mainly Latin Americans, but always some from the African continent as well.

Every Wednesday night, the community would gather for Mass at the men’s house, guests and staff alike. It was a simple Mass, in a large room converted into a chapel with the addition of a makeshift altar and folding chairs. There would be music, Spanish language hymns led by Casa Juan Diego’s founders, Mark and Louise Zwick, and usually a guest would give a testimony about his or her journey to the United States at some point during the evening.

A weekly ritual, this weeknight Mass could easily be written off as just another hum-drum obligation of life at the Worker. Some of the guests (who were required to attend) and even sometimes the staff certainly looked at it that way. But on one or two of the Wednesday nights while I was there, there was something about the Mass that struck me as powerful, essential – mystical, even.

If I looked around, I could observe the hardship and trauma the guests carried with them. Bodily exhaustion was apparent, as many of them sat slumped in their chairs or slowly shuffled up for communion. Many wore the poorly fitting, ill-suited clothes they’d picked out from our storehouse of donations. Some of the women were wrangling children, drawing on their last ounces of patience to keep them calm.

However, on the faces of some I could also see something akin to relief. For many, the Mass ritual was familiar, a balm after months of unfamiliarity on a harsh and dangerous journey. Here in this Mass, the majority who spoke Spanish heard themselves called “brothers and sisters.” Here in this space, they were told they were welcome. There was bread enough for everyone.

In today’s readings for the Feast of Corpus Christi, in which we celebrate the power of the Eucharist, we hear the account of Jesus’ last supper from St. Paul, followed by the beautiful Corpus Christi Sequence, then followed by the Gospel of Luke account of the multiplication of loaves. A few lines strike me as I recall the experience of those Wednesday night Masses:

From the Sequence: “Here beneath these signs are hidden, Priceless things to sense forbidden, Signs, not things are all we see.”

From the Gospel: “Then taking the five loaves and the two fish, and looking up to heaven, [Jesus] said the blessing over them, broke them, and gave them to the disciples to set before the crowd. They all ate and were satisfied.”

Hidden beneath the hum-drum appearance of those Wednesday Masses were “priceless things,” effected by God’s grace. First and foremost, Jesus was in our midst in the Eucharist, but also in the peaceful gathering of believers, as well as in the very presence and experience of the migrant and outcast.

On this Sunday in which we celebrate the centrality of the Eucharist to our life of faith, I think back on this Mass and realize the power of sharing that bread and wine – Body and Blood – in making us, a disparate group of people gathered from all corners of the world, one.

The people in that room were outcasts, called “illegal” and reviled by many in the United States who didn’t want them there. The broken circumstances they were facing were representative of the fractured nature of the body of Christ. Yet in that room, we experienced the “hidden” reality of our oneness, and we enacted welcome by offering hospitality and sharing Bread. Even if the Mass passed by, seeming so ordinary, we came away newly “satisfied.”

It strikes me that so much of life is that way: true realities hidden beneath ordinary things. Believing in Christ in the Eucharist teaches us to look at the world through the eyes of faith. Jesus is present in the Bread, and with the eyes of faith we know also that he is present in our brothers and sisters, the migrant and the outcast, and that we, his people, divided in so many ways, are somehow also made one through his love.