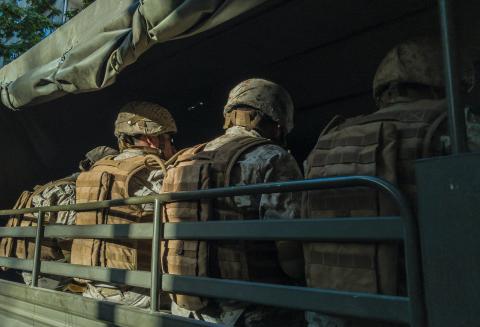 Afghans and U.S. faith groups navigate great challenges as they respond to the crises surrounding the U.S. military withdrawal. This article was published in the September-October 2021 issue of NewsNotes.

In the last two weeks of August, the United States military withdrawal and evacuation of U.S. citizens, allies, and other vulnerable Afghans concluded while the Taliban formed a new government in Afghanistan. Details of a terrorist attack outside the Kabul airport, and a retaliatory U.S. attack on members of the Islamic State affiliate ISIS-K, continued to emerge. As the situation unfolded, religious groups scrambled to respond to both emergent and long-term needs of the Afghan people.

Immediate efforts by MOGC and partner advocacy organizations focused on Afghans in danger of being targeted by the Taliban. These included those eligible for Special Immigrant Visas (SIVs) after collaborating with U.S. forces, but also journalists, women’s rights activists, ethnic minorities, and others. Multi-faith groups urged the United States to ensure safe passage for those wishing to evacuate and to offer them a welcoming home.

In responding to the crisis, aid and advocacy organizations sought to collaborate while navigating the crucial distinctions between their roles. Humanitarian aid work demands political neutrality to help the most vulnerable under whatever group may hold power, while human rights advocates are often called to stand publicly with communities and individuals persecuted precisely for political reasons. In a conference call with MOGC and other faith-based advocacy groups, a representative of one religious aid organization currently working in Afghanistan pointed out that some Afghan groups are pursuing war crimes charges against the United States in the International Criminal Court, and could accuse groups advocating for SIVs of protecting persons who aided and abetted war crimes.

An increasing concern for organizations who will continue their work in Afghanistan is how U.S. sanctions of the Taliban may be interpreted now that the group has taken power. As the cases of Iran, Venezuela, and other sanctioned countries have demonstrated, even so-called “smart” or targeted sanctions that officially exempt humanitarian groups can indirectly hamper the efforts of healthcare providers and aid organizations who depend on impacted financial institutions and risk punishment for paying taxes or otherwise doing business deemed to violate sanctions. The U.S. Treasury Department has begun discussions with aid groups, expressing an interest in ensuring their work be allowed to continue.

Among the courageous Afghan staff carrying out the bulk of the aid and peacebuilding work for international NGOs are many women. International diplomatic pressure must be applied to the Taliban, particularly through the United Nations, to allow these women to continue their vital work, especially in serving other women and girls.

Finally, faith groups and other peace advocates discussed what peacebuilding in Afghanistan might look like going forward. Often these are conversations that began 20 years ago in the wake of the 9/11 attacks. But 20 years of war have made the work more challenging than ever. Nearly 40 million Afghans will remain in Afghanistan after the evacuations have ended. Among them are civil society leaders who have spent the war pursuing nonviolent alternatives and preparing for peace. After numerous failures, we must give them the support they need.

Faith in action: Contact the Biden administration to urge them to generously welcome Afghan refugees and provide humanitarian aid on the ground. Visit: https://bit.ly/3k4zi8s

Explore a list of ways to help Afghan refugees from Women for Afghan Women.
Visit https://womenforafghanwomen.org/ and click on “Resources and Other Ways to Help”