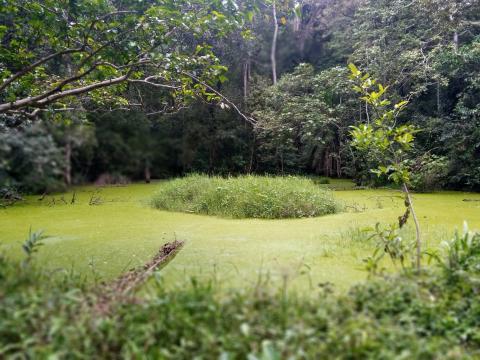 The State of the World’s Forest Report 2022 offers a three-pronged approach to unlock the economic potential of trees and forests while preserving their status as the greatest carbon capture technology in the world. This article was published in the July-August 2022 issue of NewNotes.

Forests originated about 380 million years ago. Twelve thousand years ago, forests made up 50% of Earth’s surface area but today they comprise only 31%, since much of forested land has been changed to cropland. Despite forests’ many benefits, including mitigation of climate change, the world has lost another 420 million hectares of forest since 1990.

The Secretary General and Assistant Secretary of the World Forestry Congress held in Seoul, South Korea, in May, scientists Eun-Sik Park of Korea and Peter Csoka of Hungary, wrote an essay describing the value of forests:

“Restoring millions of hectares of degraded lands with trees and other forest plants will provide more habitat for wildlife, protect water catchments, boost agricultural productivity, and capture and store carbon. When sustainably produced, wood (and many other forest products) is renewable, recyclable, climate friendly and incredibly versatile. It has the potential to transform the building sector, provide sustainable renewable energy, and help us move towards a more circular bioeconomy. Healthy, well-managed forests also decrease the risk of outbreaks of infectious diseases and have measurable psychological benefits. Achieving such positive outcomes and rebalancing our relationship with nature will require fundamental changes in thinking, attitudes, and economic systems.”

The State of the World’s Forests Report 2022, released at the Congress in Seoul, states that there will be no healthy economy on an unhealthy planet. “Environmental degradation is contributing to climate change, biodiversity loss and emergence of new diseases,” it explains. “Forests and trees can play crucial roles in addressing these crises and moving towards sustainable economies.”

The report also describes the role forests can play in meeting the rising demand for renewable materials. Demand for forest-based biomass (organic matter used as a fuel) is expected to rise further, driven mainly by construction and packaging. Forests can drive a transition to a more efficient and circular use of biomaterials.

But forest and farm producers need more incentive to scale up green recovery, the report notes. “They must derive substantial tangible benefits from restoring and sustainably managing forest and tree resources.” Greater private investments are needed as well as policy shifts that maximize the interconnection between agriculture and forestry across agrifood systems.

The report offered the following three inter-related pathways to preserve forests while expanding their potential to drive the economy and heal the world.

The report recommends the need for greater finance to implement these pathways. Funding needs to triple to $200 billion a year by 2030 for forest establishment and management in order to meet climate, biodiversity and land degradation neutrality targets. REDD+ frameworks and other related results-based payment schemes could play a key role in supporting developing countries to move along the three pathways. REDD+ refers to reducing emissions from deforestation and forest degradation.

It is important to note that smallholders, local communities and Indigenous Peoples own or manage nearly half – 4.35 billion hectares – of the world’s forest and farm landscapes, and, along with women and youth, they need to be empowered and incentivized to take a leading role in the forest pathways. Smallholders on such lands generate a gross annual income of $1.29 trillion. More than 8.5 million producer organizations now exist to help local actors to participate in and support a green recovery.

The report concludes by saying that there is no time to lose.

“The Earth is astonishingly rich in biodiversity and natural resources, but current trends indicate an imminent danger of squandering this natural wealth, thereby endangering the world’s diverse peoples and many other species. More immediately, there is a need to recover from the hardship caused by the COVID-19 pandemic and to strive to ensure that all people are free from hunger and poverty.

“Humanity has the power to change environmental conditions at a planetary scale and an accompanying imperative to take action to maintain environmental conditions within boundaries that enable all life forms to flourish. Using nature-based approaches such as those involving trees and forests is a logical place to start in repairing the damage that has already been done to natural systems and in developing truly sustainable solutions to the problems and challenges articulated in this report.”

Image: Kakamega Forest in Kenya is what remains of ancient tropical rainforest that stretched across central Africa. Photo by WCKagio, CC BY-SA 4.0 via Wikimedia Commons.