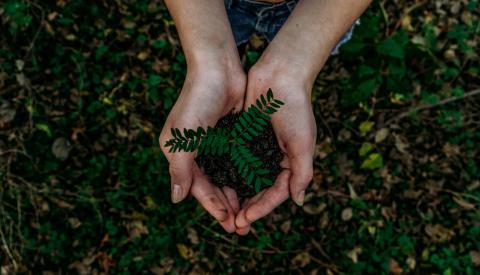 In August 2021, the UN’s Intergovernmental Panel on Climate Change (IPCC) released a new report on the precarious status of Earth’s changing climate. This article was published in the September-October 2021 issue of NewsNotes.

A new UN climate report paints a grim picture of the conditions facing life on Earth if humans do not act immediately to drastically reduce carbon emissions. Global temperatures are getting so hot, the report says, that Earth is on track to surpass damaging levels of warming in about a decade.

Calling it a “code red for humanity,” the United Nations says the report demonstrates “incontrovertibly” that global temperature rise over the past 200 years has been driven almost entirely by human activity. It explains how the next decade will be crucial for reducing planet-warming emissions, and that the greater the warming the more intense the extreme weather — hurricanes, wildfires, floods, and heat waves — and the more likely the impacts will be irreversible.

Hope and motivation to move forward can feel fleeting in the wake of such grave news. In an article for Sojourner’s Magazine, Avery Davis Lamb and Karyn Bigelow, co-executive directors of Creation Justice Ministries, reflect on finding hope amid the climate crisis:

Hope is not optimism. It is not the expectation that everything will turn out in the end. Nor is it the belief that we are doomed, despite our best efforts. Rather, hope is the possibility that through truth-telling and holy action, we might turn back to God. To have Christian hope is to act in courage, claiming what we know and what we can do.

“Let’s tell the truth: We know what is happening. We know it is bad. We know who is causing it. We know how to change it,” Davis and Bigelow write. Let this be a source of our hope.

The scientists behind the report explain that we can still act to prevent the worst impacts of climate change. In November, world leaders will gather in Glasgow, Scotland, for the annual UN climate negotiations. They plan to make formal pledges for robust climate action over the next five years that will collectively limit warming to well below 2, preferably to 1.5 degrees Celsius, compared to pre-industrial levels, as agreed upon in Paris in 2015. But achieving this will take political courage in the face of powerful economic forces, such as corporate influence and dependence on fossil fuel profits.

Financial assistance from wealthy countries and corporations will also be necessary to build climate resilient infrastructure, jobs, and food systems and to prevent the worst outcomes for the most vulnerable. Communities and countries facing irreparable loss and damages will need help financing recovery or relocation, largely with support from wealthy countries such as the United States whose economies have benefited the most from fossil fuel consumption.

The Biden administration and Democrats in Congress have named climate action as a top priority. Pres. Biden has a plan to keep the Earth’s warming to 2 °C. However, implementing these plans will be a challenge, given the Democrats’ slim majority in Congress.

Nevertheless, the remaining tenure of this Congress offers a window for advocates to achieve various forms of climate action. This starts with the budget reconciliation bill from which Congress can reprioritize spending, revenues, deficits, and debt. This budget only needs a simple majority to pass and is filibuster free. House leaders face pressure to write and pass the reconciliation plan before they approve the infrastructure bill which the Senate passed in August.

The $1 trillion bipartisan infrastructure bill offers a possibility for supporting climate resilient infrastructure. While some politicians and organizations hailed the legislation as climate ambitious, others noted it included too little funding for programs such as zero-emissions public transportation and that it allocated some money to unproven climate technologies or harmful solutions that benefit fossil fuel companies. The House plans to vote on the infrastructure bill by Sept. 27.

Another promising sign is that investors and corporations are shifting away from fossil fuels and into environmental and social investments. According to the U.S. Energy Information Agency, oil and coal consumption is declining and 70% of new investments in the power sector are going to renewable energy.

As Bigelow and Davis conclude in their article, “...the journey of Christian hope is a spiritual survival strategy. Perhaps by the grace of God and the work of our hands, we might have hope.”