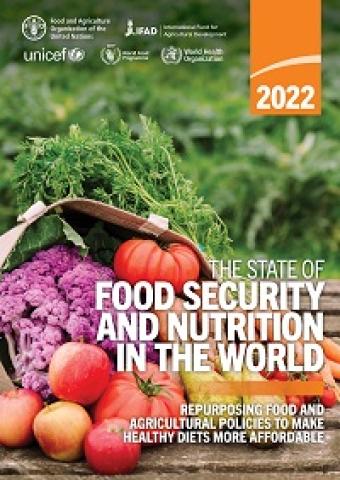 World hunger and severe food insecurity grew in 2021, making the world's goal of achieving "zero hunger" by 2030 even more unlikely. The following article was published in the September-October 2022 issue of NewsNotes.

The latest State of Food Security and Nutrition in the World report from the Food and Agricultural Organization (FAO) and four other UN-related agencies states “we are moving in the wrong direction,” and predicts that in 2030 there will still be 670 million people affected by hunger, the same number as in 2015 when the Sustainable Development Goals targeted an end to hunger by 2030. The report highlights the extent of the problem, the many inter-related challenges to overcoming hunger, and offers some recommendations for governments.

The report points out that targets for ending hunger, food insecurity, and all forms of malnutrition are not being met, with progress recorded only for exclusive breastfeeding for children under six months and for child stunting. It identifies conflict, including the war in Ukraine, along with climate extremes, economic shocks, and growing inequalities as the major drivers of food insecurity and malnutrition.

“The global price spikes in food, fuel and fertilizers that we are seeing as a result of the crisis in Ukraine threaten to push countries around the world into famine,” said World Food Program Executive Director David Beasley. He warned that this could result in “global destabilization, starvation, and mass migration on an unprecedented scale.”

Some of the findings of the report are:

One problem is that price support for agriculture goes primarily to producers with relatively little going to consumers. Furthermore, the types of crops subsidized are primarily grains and little goes to the more nutritious foods, such as fruit, vegetables and foods high in fiber.

The report examines various scenarios of public support to the food and agriculture sector to promote affordable, healthy diets. An empirically grounded observation has shown that the objective of promoting the production of nutritious foods would contribute to making a healthy diet less costly globally and particularly in middle-income countries. Actions required are not only transferring subsidies from producers of grain staples to consumers, but also removing or reducing border and market price controls for healthy foods. A further benefit is reduction in global greenhouse emissions.

Targeting subsidies to consumers of “high priority” foods will also lead to an increase in farm income in low-income countries, benefitting small farmers, women and youth, and result in a reduction in both extreme poverty and malnourishment. The trade-off is that income for producers of grain staples will decline, but this will affect mainly high-income countries.

Two major challenges for low-income countries with low government budgets will be how to provide general services support to producers of nutritious foods and subsidies to consumers of high-priority foods. The report concludes: “Strong institutions on a local, national and global level will be crucial, as well as engaging and incentivizing stakeholders from the public sector, the private sector and international organizations to support the repurposing efforts.”