A report from the UN Development Programme (UNDP) introduces the term “deprivation bundles” to describe recurring patterns of poverty involving the lack of basic elements such as access to education, health, housing, drinking water, sanitation, and electricity. Data show that most poor people are impacted by two to four or even more of these deprivations and that being deprived in one area often leads to deprivation in one or two other areas.

For example, in Laos, families that lack access to cooking fuel  often are unable to send their children to school because the children must spend their days collecting firewood. Conversely, Nepal’s investment in sanitation reduced child mortality by improved access to clean drinking water and nutrition.

This report examined 6.1 billion people in 111 developing countries and found that 1.2 billion (19.1%) experience combinations of deprivations, a population demographic much larger than those experiencing monetary poverty only, set at $1.90 per capita daily income. The household surveys were done prior to 2020 and revealed that 470 million were deprived in both nutrition and sanitation, making them vulnerable to infectious diseases, and over half (593 million) lacked both cooking fuel and electricity.

The largest number of poor people live in Sub-Saharan Africa (579 million), followed by South Asia (385 million), but deprivation profiles vary by region. South Asia is more likely to be deprived in nutrition, cooking fuel, sanitation and housing, whereas Sub-Saharan Africa is likely to have these four plus deprivations in drinking water and electricity. The report states: “Understanding these deprivation profiles – or bundles – helps us in designing integrated policies that can tackle multiple deprivations at once.”

Dr. Teresa de Jesus of Honduras further explains, “The challenge for us as a community is to join forces. Focusing only on health will not work; family income and housing conditions also limit a child’s development and increase the risk for undernourishment.”

Three countries have been put forward as examples of addressing the interlinkages in multidimensional poverty.

Ethiopia saw a reduction in poverty from 83.5 percent in 2011 to 68.8 percent in 2019, a result of improvements in years of schooling, access to drinking water, electricity, better housing, cooking fuel, and sanitation.

In Laos, improvements in access to cooking fuel, housing, electricity, sanitation, and years of schooling resulted in poverty dropping from 40 percent to 23 percent.

Nepal had significant improvements in sanitation, which led to great improvements in child nutrition, child mortality, and clean drinking water, and was accompanied by a huge decline in the incidence of poverty from 39 percent to 17 percent during this period of 2011 to 2019.

The report concludes with a call to conduct frequent and up-to-date household surveys to measure poverty and launch strategic tools to eliminate abject poverty, even as new threats arise. Recent data are vital for planning, designing policies, and incentivizing and recognizing change. Regular multitopic household surveys, while not perfect, are the best instrument for estimating multidimensional poverty. Advances in data collection, as important as they are, have not exceeded the value of frequent, extensive household surveys.

Read the full report and see associated charts at https://mogc.info/UN2022-MDPI

Chart from page ten of UNDP and OPHI report, page 10. 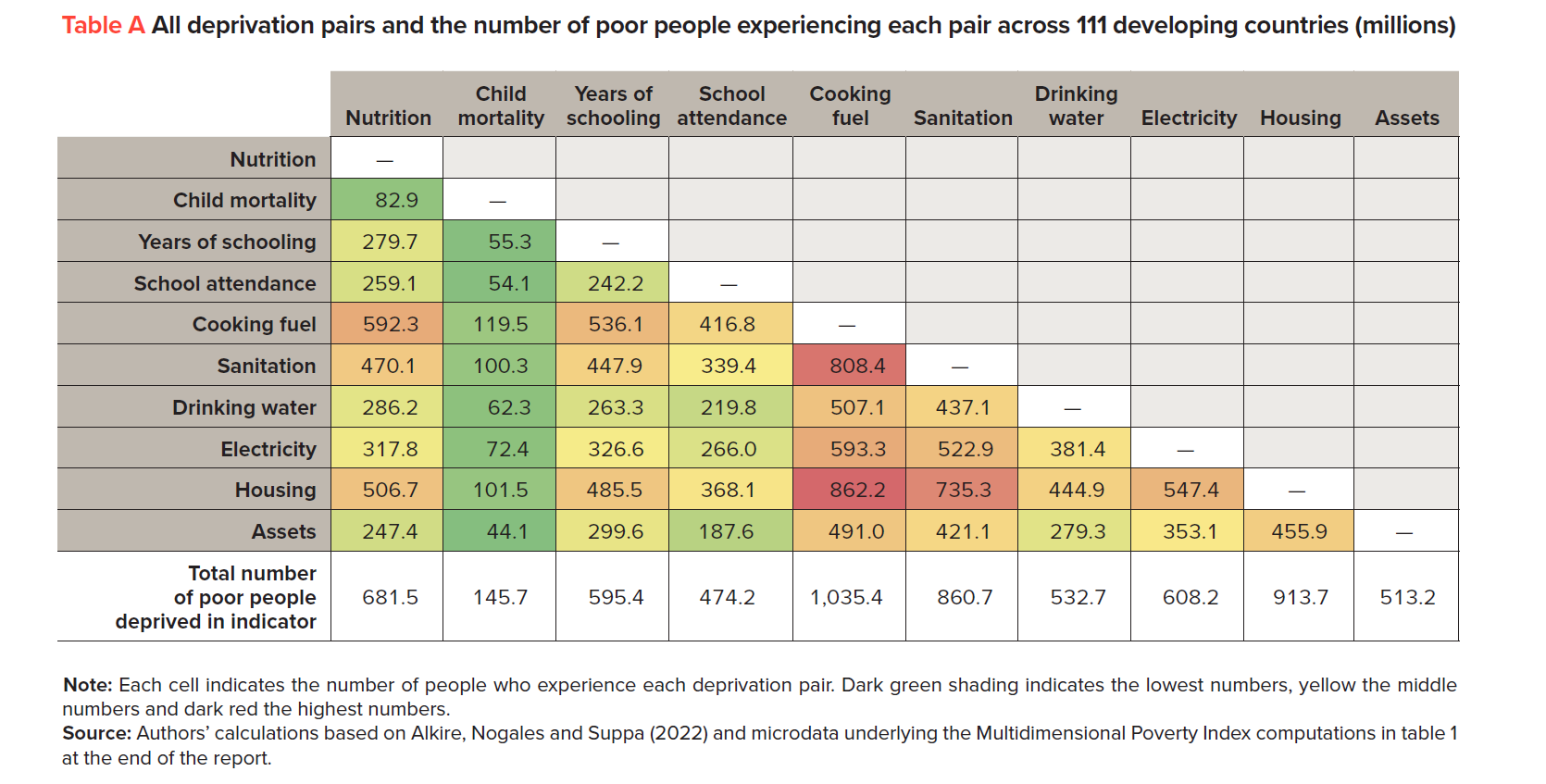