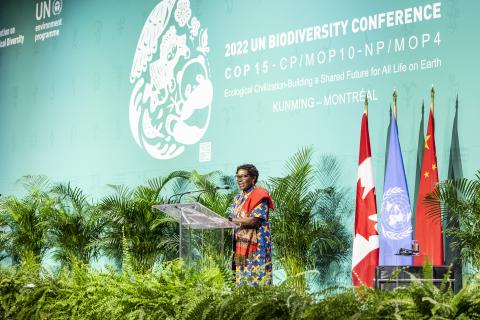 As billions of eyes were fixed on the World Cup final in Qatar, the Earth itself was vying for victory in a match in Montreal, Canada. There, representatives from 196 countries signed onto a new framework to address biodiversity loss and restore natural ecosystems by 2030.

More than a million plant and animal species are threatened with extinction by the end of the century, barring major changes. Decades of destructive ecosystems have left many biologically critical areas approaching irreversible tipping points that could destabilize life on the planet.

The ball that finally got to the goalpost was a complex one, but it has one defining characteristic: a pledge to “halt and reverse biodiversity loss” by protecting 30 percent of Earth’s land and sea area by 2030. For commentators of this spectacular match, this was its “Paris moment.” comparing the framework’s 30×30 goal to the target under the 2015 Paris Agreement on climate change to limit global warming to 1.5 degrees Celsius  Both are concrete and thus easy to understand, albeit less easy to achieve and certainly not ambitious enough.

Indeed, the gavel had barely been raised when a voice of disagreement called out. The Democratic Republic of the Congo raised an objection. Who is going to pay for all this? The representative for the Democratic Republic of Congo objected to the proposed final text for not setting up a specific biodiversity fund. The majority of the world’s biodiversity is in the Global South. The DRC itself holds about a third of the world’s pristine forests. Setting this all aside to protect biodiversity sounds noble to the Global North but means disuse of resources that could provide desperately needed income for its inhabitants.

In response to the question of who will fund this dream, another 30×30 deal was struck: a pledge to increase the flow of finance to developing nations to care for nature to at least $30 billion by 2030, as well as another annual $200 billion towards the conservation of biodiversity. That still falls short by between $500 - $900 billion per year according to experts.

And then there is the question of oversight. There is nothing legally binding about this framework. All that exists is the peer pressure of those carrying the ball up and down the field, the agreement of nations to report, review and voluntarily “ratchet up” their ambitions for tackling biodiversity loss. That makes this goal not quite the definitive victory that 8 billion people and 1 million species need. But for now, it’s what the world has.

There were other goals too, including the commitments to cut global food waste by half, reduce pollution, such as pesticides and plastics, and combat invasive species. Finally, the conference agreed to the goal of championing Indigenous peoples’ rights. This group resides on 20 percent of the planet’s lands but stewards 80 percent of its biodiversity. There was recognition that they are doing something right that should enlighten us all.

The United States is just one of two countries in the world not party to the Convention on Biological Diversity. Although President Clinton signed on, the requisite two-thirds Senate approval never materialized. President Biden’s 2021 America the Beautiful plan unveiled a similar proposal to the UN Framework, a commitment to conserve 30 percent of the nation’s land and waters by 2030. But this plan too is voluntary. Congressional efforts to create a National Biodiversity Strategy were introduced then quickly canned.

Photo of COP15 opening by UN Biodiversity via Flickr, CC