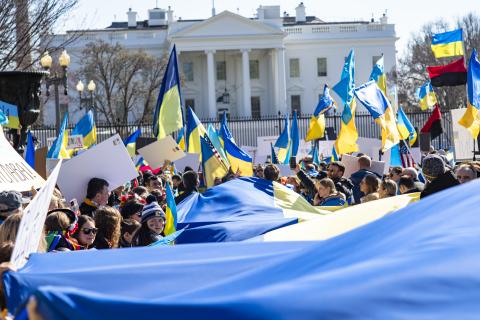 Statement by participants of the Science and Ethics of Happiness Study Group at a meeting hosted at the Casina Pio IV, Vatican City, June 6-7, 2022. This was published in the July-August 2022 issue of NewNotes.

Jesus taught the world that peacemakers are blessed, for they are the children of God. As war rages in Ukraine, the world needs peacemakers to help the warring sides to choose peace over continued conflict. The U.S., European Union, Turkey, China, and other countries should help both sides to feel secure in a negotiated peace agreement.  For Ukraine, security means that a peace agreement will not be followed by renewed Russian threats or incursions. For Russia, security means that withdrawing from Ukraine will not be followed by the eastward expansion of NATO and heavy armaments into Ukraine. Peace, in short, means a neutral Ukraine that is secure in its sovereignty, independence, and territorial integrity.

Pope Francis has put his plea for peacemaking in plain and powerful terms:

His All-Holiness Patriarch Bartholomew has declared:

We call upon all parties involved to pursue this path of dialogue and respect for international law, in order to bring an end to the conflict and allow all Ukrainians to live in harmony. Arms are not the solution.

The aim of peacemaking in Ukraine is not merely a negative peace – that is, a peace without justice – but a positive peace, based firmly on the four pillars of moral relations between states recognized by Saint John XXIII in his magisterial Pacem in Terris: truth, justice, willing cooperation, and freedom (Paragraph 80). Such moral relations are needed not only between Russia and Ukraine, but also between Russia, the US, and the European Union.

Russia’s invasion of Ukraine is no doubt in flagrant violation of the UN Charter and international law. Russia’s differences with Ukraine should certainly have been worked out through negotiations backed by the UN Security Council, with the security interests of all countries respected. Now, the grim realities of the ongoing battle, with neither side likely to win a decisive military victory, should push both sides to the negotiating table as soon as possible to avoid the prolongation of the war and to reach a peace with justice.

The war in Ukraine is likely to evolve into a war of attrition and end as either a frozen conflict or a negotiated peace, rather than as an outright victory of one side over the other. A negotiated peace would be a superior outcome than the sacrifices of a war of attrition and a frozen conflict for both the peoples and governments of Ukraine, Russia, the US and EU, and the rest of the world.

If the war ends as a frozen conflict, Russia would continue to occupy a sizable part of eastern and southern Ukraine, while Western sanctions against Russia would remain in place. Trade and investment between Russia and the West would remain blocked, turning into a general contraction of world trade and development. Arms and military personnel would also continue to flow into Ukraine from outside sources.

If the war instead ends in a negotiated peace, further heavy casualties among the civilian population of Ukraine and the militaries of both sides would be avoided and the existence and independence of the Ukrainian state could be guaranteed against outside attempts to overthrow it. Most of the regions that Russia currently occupies would return to Ukrainian sovereignty, certain regions might become subject to special regulations, the Russian military would be withdrawn, and the Western sanctions would be lifted, allowing reconstruction and the implementation of a higher level of security for all the actors in the Ukrainian society and neighboring countries.

The basic terms of a possible peace agreement were outlined in the second part of March when negotiations between the two sides were reported by both sides to be progressing well, and again more recently in Italy’s proposal of a four-part peace plan in late May. In the negotiations in the second part of March, Ukraine suggested four points for a peace settlement: neutrality; international security guarantees for Ukraine; a prolonged period to determine conclusively the status of Crimea; and negotiations over “the complex issues of Donbas.” Italy’s Peace Plan also has four points: a ceasefire; Ukraine’s neutrality; ongoing negotiations over Crimea and Donbas; and multilateral negotiations within the OSCE and between Russia and NATO on regional security arrangements.

While relying on the practical wisdom (phronesis) of the blessed peacemakers, based on the identifiable roots of the conflict, the negotiations in March, and the peace initiatives to date, we would suggest the following benchmarks for a ceasefire and positive peace agreement:

(1) Neutrality of Ukraine, i.e., relinquishing the national ambition to join NATO while recognizing Ukraine’s freedom to enter into agreements with the European Union and others;

(2) Security guarantees for sovereignty, independence, and territorial integrity of Ukraine provided by the P-5 members of the United Nations (China, France, Russia, United Kingdom, and United States) plus the European Union and Turkey, which might include military transparency and restrictions of military stationing and large-scale exercises in border areas under international observation connected to the lifting of economic sanctions;

(3) Russian de facto control of Crimea for a period of years, after which the parties would seek through diplomacy a permanent de jure settlement, which might include facilitated access for local communities to both Ukraine and Russia, liberal border crossing policies for persons and trade, stationing of Russia’s Black Sea Fleet and financial compensations;

(4) Autonomy of the Lugansk and Donetsk regions within Ukraine, which might include economic, political, and cultural aspects, to be further detailed within a short period of time;

(5) Guaranteed commercial access of both Ukraine and Russia to the Black Sea Ports of both countries;

(6) The phased removal of Western sanctions on Russia in conjunction with the withdrawal of the Russian military according to the agreement;

(7) A Multilateral Fund for Reconstruction and Development of the war-torn regions of Ukraine – in which Russia also participates -- and immediate access for humanitarian relief;

Towards a Positive Peace

President John F. Kennedy wisely observed that “Genuine peace must be the product of many nations, the sum of many acts. It must be dynamic, not static, changing to meet the challenge of each new generation. For peace is a process—a way of solving problems.” To solve problems, we need cooperation, and for cooperation, we need trust. Lasting peace, therefore, depends not only on formal treaties but also on the cooperation in communities, across ethnicities, religions, and nation states. The media also bears the responsibility that the drumbeats of war give way to words of peace.

Religious communities are at the forefront of positive peace. Religious communities bring people together in the spirit of human dignity and justice under God, and have the ability and mission to bring people together across faiths and ethnicities as well. The Catholic Church, the Ecumenical Patriarchate, the Moscow Patriarchate, and the Orthodox Church of Ukraine are the pillars of a positive peace between Russia and Ukraine, and within the diverse communities within Ukraine, and can play a crucial role in the needed reconciliation process as a path to positive peace.

We commend the religious leaders of all faiths to support Russia and Ukraine to seek a positive peace, and to abide by the words of Isaiah:

They will beat their swords into plowshares
and their spears into pruning hooks. Nation will not take up sword against nation,
nor will they train for war anymore. Isaiah 2: 3-4.

Addendum of further considerations along with the statement are available here.

Faith in action: A peace delegation of religious leaders from Europe and the United States visited Kyiv, Ukraine in May. Testimony is available from participants Rose Berger of Sojourner Magazine and Sr. Sheila Kinsey of the International Union of Superiors General.

Image: Rally for peace in Ukraine outside the White House in Washington, DC. Photo by Flickr/Mike Maguire CC BY 2.0