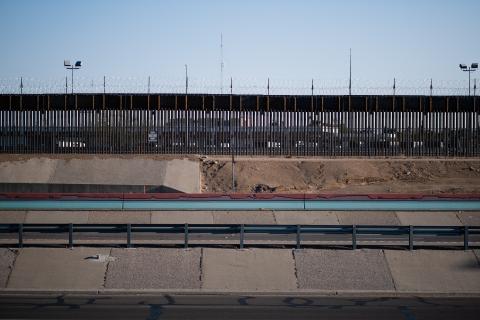 Immigrant and faith-based advocates continue to call for the end of Title 42 rapid expulsions of migrants at the border despite pushback from some members of Congress. The following article was published in the May-June 2022 edition of NewsNotes.

On April 1, the Centers for Disease Control (CDC) and the Biden administration announced that, effective May 23, they would end a Trump-era expulsion policy, known as Title 42. A health order issued by the CDC in March 2020, Title 42 has allowed border agents to bypass typical procedures and expel migrants immediately, which has prevented people seeking refuge from danger or persecution from exercising their legal right to seek asylum at a U.S. border.

After two years of advocacy against this policy, faith communities and public health experts rejoiced at the news. However, the CDC announcement was immediately met with pushback from some lawmakers and governors claiming that revoking the policy would lead to unprecedented chaos at the border. Several moderate Democrats in Congress joined Republicans in expressing concern about lack of preparedness to handle the number of migrant arrivals after Title 42 rapid expulsions are ended.

In response, the Maryknoll Office for Global Concerns joined immigrant advocates and border shelters in unequivocally stating that the time to end Title 42 is now. In late April, MOGC joined a coalition of over 300 faith-based leaders and organizations in sending a letter to Congress urging them to reject legislative efforts to maintain Title 42.  In addition, Maryknoll Sisters joined in a letter from Catholic sisters to Pres. Biden calling on him to stick with his plan to wind down Title 42.

The policy has led to approximately 1.7 million rapid expulsions of migrants without due process for asylum claims. Since the start of the Biden administration alone, human rights groups have documented nearly 10,000 incidents of kidnapping, torture, rape, and other violent attacks against vulnerable migrants expelled under Title 42. Expulsions under Title 42 carry the potential of returning asylum seekers back to the risk of persecution from which they fled, a move illegal under international law.

While several state leaders and members of Congress claim that Title 42 is necessary to maintain control at the border, immigration policy experts and leaders in the Biden administration reiterate that Title 42 was a temporary health policy – not an immigration policy -- that is now outdated. Low COVID case rates have led the federal government and states to relax pandemic restrictions to the extent that such rapid expulsions are especially unwarranted. Even at the height of the pandemic, public health experts and international observers at the UN spoke out against the Title 42 policy, stating that it was possible to receive migrants safely while honoring the legal right to seek asylum.

Although proponents of Title 42 expulsions claim that the health order has prevented chaos at the border, the data indicate that the rapid expulsions have in some ways increased the strain on border management systems. Title 42 expulsions do not carry the same penalties as regular removals or deportations, so migrants who are expelled under Title 42 have a higher incentive to keep trying to cross; repeat border crossings have increased as a result, according to a Government Accountability Office report. Repeat crossings place migrants at further risk of danger and put strain on border agencies processing migrant crossings. Repeat crossings also inflate the recorded number of border crossings, causing a misleading picture of the number of migrants actually arriving at the border.

In addition, Title 42 has been inconsistently applied. Due to logistical challenges of carrying out expulsions, migrants of some nationalities have been expelled at far greater rates than others. Black immigrant organizations have stated that Black migrants have been disproportionately targeted for expulsion under Title 42. Ukrainian asylum seekers have been exempt from Title 42 expulsions. Their well-warranted reception into the United States indicates that the U.S. government is capable of a robust, coordinated humanitarian response to an influx of migrants when the need and political will are present.

Catholic border reception centers have stated their commitment to work with the federal government to create a humane, well-managed system of reception for migrants arriving at the border seeking asylum. The federal government has proposed a detailed plan to engage with local actors to wind down Title 42, which immigrant advocates at the border say is a good first step.

“Our faith calls us to seek justice and welcome the newcomer even when it is difficult,” the Catholic sisters expressed in their letter to Biden. “In light of the values that lie at the heart of our shared Catholic faith… we urge you to end Title 42 on May 23 and to restore the asylum system as soon as possible.”