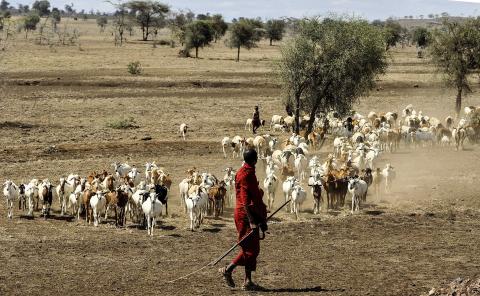 Increasing threats to Maasai lands raise concerns of a systematic landgrab from indigenous pastoral peoples. The following article was published in the September-October 2022 issue of NewsNotes.

In northern Tanzania, more than 70,000 Indigenous Maasai pastoralists are facing eviction from ancestral grazing land that the government plans to lease to a UAE-based company to create a wildlife corridor for trophy hunting and elite tourism.

As previously reported in NewsNotes, violence erupted on June 8 in Loliondo, a vast wildland on the northeastern boundary of the Serengeti plains. Numerous videos on Twitter showed police firing live ammunition on the Maasai who had gathered for a protest meeting to demand the government remove boundary posts newly erected on Maasai land for the new game reserve, which includes the Ngorongoro Conservation Area, a protected area and a UNESCO World Heritage Site.

“Our homeland has been turned into a hunting park, with wealthy people coming in to hunt the wildlife,” representatives of the Maasai said in a statement at the UN Convention on Biological Diversity in Nairobi, Kenya, on June 23.

The Oakland Institute, an international policy think tank based in California, released a statement on July 27 after the UN High Commissioner for Human Rights Michelle Bachelet visited Tanzania, saying the UN and donor countries should not trust the government and should visit the Maasai communities under threat.

“A pervasive climate of fear remains among the displaced whose lives have been completely upended,” said Anuradha Mittal, Executive Director of the Oakland Institute.

The Oakland Institute reports that more than 2,000 Maasai, displaced by the violence by the police, remain in Kenya, suffering from hunger and living in fear. Approximately 70,000 people have lost access to dry-season grazing land needed for their livestock. In addition to the 31 people who were shot and sustained injuries, 107 people needed care after the violence.

The International Land Coalition has a petition to Tanzanian President Samia Suluhu Hassan with three asks:
•    Desist from evicting the Maasai indigenous pastoralists and respect their customary land rights
•    Ensure that land tenure of the concerned communities in Ngorongoro, Loliondo and Sale is protected
•    Recognize indigenous peoples’ land rights and their economic, cultural and environmental security

More than a thousand kilometers away, in southern Maasailand in Tanzania, Maasai in Kiteto district are facing another threat to their land: the construction of the East African Crude Oil Pipeline (EACOP), set to be the longest heated oil pipeline in the world. The Ugandan and Tanzanian governments signed final agreements on the construction of the pipeline in 2020 and hired French company Total (recently renamed TotalEnergies) to start development in 2021. Once completed, the pipeline will run 900 miles, transporting more than 23,000 tons of crude oil from Uganda to Tanzania daily, mostly for export and at great profit for the two governments.

The environmental and human impacts of the EACOP will be extensive and many fear, not properly addressed. “Voices from Tanzania” research in 2019 by Pilot Light Development Organization (a Tanzanian NGO representing Maasai communities in Arusha and Manyara regions) details concerns the Kiteto communities have about the pipeline: loss of wet and dry season grazing areas, vegetation that prevents soil erosion, medicinal plants and Maasai temporary homesteads.

Also, the presence of large groups of construction workers on similar projects around the world have been known to bring promiscuous behavior, communicable and infectious diseases, and violence against women. There are also concerns about waste management. One respondent in the study wondered “We Maasai don’t use paper or have food waste. Where will the waste go? Into our wells, forests, grazing areas and wetlands?”
Communities also expressed concern at the lack of participation and consultation, despite this being a key pillar of the EACOP-proposed mitigation plans. In Kiteto district, affected communities reported that there has been no official dialogue with EACOP since the first information seminars in 2016.

Environmental groups are fighting back, taking TotalEnergies to court for misleading customers by violating its climate pledge to reach-zero by 2050. In March, four environmental groups—Greenpeace France, Friends of the Earth France, Notre Affaire a Tous, and Client Earth—filed a lawsuit alleging that the company is misleading consumers and shareholders about its continued reliance on fossil fuels. They argue that TotalEnergies’ advertisements about new investments in wind and solar energy are illegal under French law.

“It is unimaginable and unconscionable to be pushing a project like this,” said Landry Ninteretse of the Africa branch of 350, an international climate advocacy group. EACOP, he said, is set to be a “climate bomb.”

Faith in action: Sign the petition https://bit.ly/MaasaiLandPetition and take actions to stop the construction of the EACOP https://www.stopeacop.net/

Photo: Maasai herdsman with goats and sheep by safaritravelplus, CC0, via Wikimedia Commons