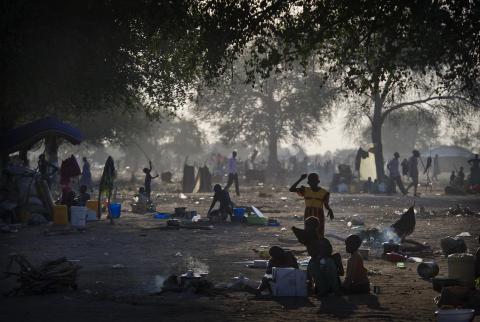 The Africa Faith and Justice Network organized an open sign on letter to the pope about ongoing challenges on the African continent prior to the papal visit to DCR and South Sudan in July. This article was published in the July-August 2022 issue of NewNotes.

Dozens of religious and humanitarian organizations with experience in the DRC and South Sudan sent a letter to Pope Francis detailing challenges there that they say have led to “endless political instability and much suffering, poverty, war, and death.” Organized by the Africa Faith and Justice Network, the signers asked the pope to raise their concerns when meeting with government and communities leaders in the DRC and South Sudan in July.

Sidelined by knee pain, Pope Francis has decided to send Cardinal Secretary of State Pietro Parolin to Kinshasa and Juba in his place.

First, the ongoing deterioration of security makes peace very fragile. “Nations are fighting against one another. Many wars are secessionist, separatist, civil, and religious. People are rioting against violent, tyrannical, and kleptocratic regimes. Decades after fighting for independence, Africans are fighting neo-colonization wars involving non-Africans. Multinationals have emerged as the new colonial masters, using the soft power of corruption and financing wars to get access to natural resources.” Violent conflicts are ongoing in more than a dozen countries across the continent.

Second, the letter names corruption as one of the reasons poverty persists in Africa. “Prioritizing the fight against corruption and adopting systems of accountability are critical for building the Africa that Africans desire,” the authors say.

“Corruption is not just financial,” they say. It can take the form of sexual harassment in the work place, nepotism and favoritism. Quoting the 2013 Symposium of Episcopal Conferences of Africa and Madagascar, the letter defines corruption as “a cancer that stands in the way of Africa’s development.”

Their third concern is social divisions due to tribalism, xenophobia, and racism. “Tribalism has led to countless deaths in Africa,” the authors tell the Holy Father, “including most recently the two countries you are visiting — the DRC and South Sudan.” At the same time, xenophobic violence against African immigrants in South Africa and racism against sub-Saharan African migrants journeying to Europe for a better life is on the increase. Declaring all forms of xenophobia and racism to be without merit, the letter calls on politicians and church leaders to be “models of tolerance in order to build nations and communities of peace and prosperity.”

Fourth, the letter describes land grabbing as a “new scramble for the partition of Africa.”

“The acquisition of Africa’s land on a large scale by multinational agribusinesses amounts to an organized land-grabbing scheme with potential consequences worse than colonization. It threatens lives, livelihoods, the environment, the peace and the sovereignty of the affected countries. Populations are being displaced and landowners are becoming landless. Prohibited toxic fertilizers and pesticides are being used on these lands, causing serious damage to rivers, lakes and even underground water sources. The current rate at which Africa is losing much of its arable land, threatens the continent’s food security and sovereignty. This must stop.”

The authors acknowledge that there are many other important issues in Africa calling for the Holy Father’s attention, including human trafficking, women’s economic empowerment, arms trade, illicit financial flows, drug abuse by youth, and widespread unemployment, buy they say the pope’s voice on the four issues they raised will have “significant impact.”

Cardinal Parolin is scheduled to land in Kinshasa on July 2 where he will meet with President Félix Tshisekedi and members of the diplomatic corps, followed by meetings with local clergy. After that, he is scheduled to travel to the far-east part of the country, to meet people displaced by clashes between the armed forces and militant groups.

Then he will fly to Juba, the capita city of South Sudan, where he will meet with President Salva Kiir, whom he last met in Rome in 2019 during retreat designed to foster peace among the battling political factions in the young country. Once again, he plans to meet with people displaced by war. There will be numerous moments to pray for peace and call for renewed commitments to cooperation and peacebuilding by community and political leaders.

Pope Francis plans to celebrate Mass with the Congolese community in Rome on the same day he had been scheduled to be in Kinshasa.

Image: Inside the refugee camp in Minkaman, Awerial County, where people have been coming to escape the fighting in Bor.. Photo by Geoff Pugh 13/1/2014. Available online by Flickr/Nando and Elsa Peretti Foundations and in the Public Domain.