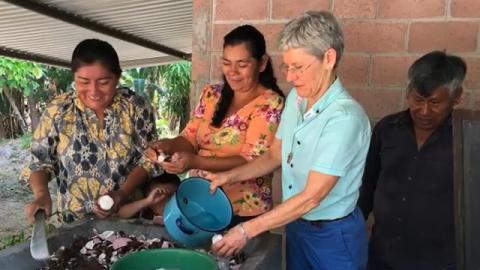 Returned Maryknoll lay missioner Gigi Gruenke writes about the devastating stories she heard about life under the state of exception in El Salvador during her visit there this past August.

On March 27, 2022, President Nayib Bukele of El Salvador issued a mandate called the state of exception. The goals of this mandate are to eliminate all gang related violence from the streets of El Salvador and to put a stop to organized crime. It was estimated that there were some 70,000 gang members in the country, and the daily number of gang-related deaths were ever rising.

Since then, public violence and deaths have been greatly reduced, and more than 50,000 citizens have been imprisoned. But no one really knows how many of these prisoners are in fact gang members.

Arrests have been arbitrary: with no evidence presented and at times the names of detained persons unknown to the arresting police or soldiers. There is no data on how many gang members have been captured,  have become temporarily inactive, or have simply fled the country. There is also no verifiable data on how many prisoners have died in the squalid prisons.

Because so many prisoners are crammed into the existing prisons, a new prison is in rapid construction outside Zacatecoluca, a city with 25,000 residents. The prison will hold 40,000 individuals.

In August, I visited the rural Bajo Lempa region where I worked as a mental health provider in the early 2000s. What is most characteristic of the individuals captured in the Bajo Lempa region and its surroundings? They are poor and live in marginalized areas.

People in Bajo Lempa are terrified: who will be picked up next? They told me devastating stories of life under the state of exception. Here are a few.

Vladimir is a husband, father, beloved grandson, and a young man I first met when he was in grade school. He was pulled away from his home and loved ones in April. The shock and pain of his detention precipitated the death soon thereafter of the grandmother who raised him.

The family, and others, told me they thought a state of repression would never return to El Salvador.

Alex and his brother were picked up, separated, and placed in different prisons. An amazing thing happened to Alex: he was hospitalized for possible leg amputations due to untreated diabetes in prison. Then he developed COVID, the combination resulting in his release. His enduring hospital memory is the kindness of the nurses and aides. He also spoke of the extreme cruelty he experienced in prison.

One friend, an older woman and wartime massacre survivor, spoke very quietly to me, unable to raise her voice even though she was safely at home. Her terrifying wartime memories overtook her ability to speak freely in this new moment of fear.

Several local people had watched in terror when their loved ones were taken from their homes. Others were taken off the dirt roads while riding their bicycles or picked up at their places of work.
Police came to a teacher’s house In the dead of night and captured her in front of her screaming 3-year-old. Some days later the child’s father was taken. This child, terrified and grieving, has regressed in many ways, including bed wetting.

Recently, soldiers pushed their way into an early childhood education center past the director—warrants are not required. While they searched the building, they told the terrified staff and preschoolers to speak up if they knew of any gang members.

This final account is one of my saddest. I first met Esmeralda when she was a teen. Her mother and relatives were engaged in a shared process of healing from a brutal massacre in 1981. Esmeralda was an active participant in a play presented annually as the survivors and members of the human rights community gathered for anniversary commemorations. Esmeralda farms for a living while raising two daughters, the youngest not yet one year old.

On April 19, Holy Thursday, Esmeralda was picked up by the police. No one knows why. Her family and human rights groups have tried to intervene but to no avail. Her 4-month-old baby girl is now over 10 months old and no longer cries for her mother, but surely her mother still weeps.

The UN Human Rights Commission knows what is going on in El Salvador, as does the Inter-American Court of Human Rights. They are asking President Bukele to be accountable in the face of these gross human rights violations and to take action to rectify the mass of undocumented imprisonments.

Does the U.S. public know about what is happening in El Salvador? What can you do to publicize the cruel and unjust state of exception?§