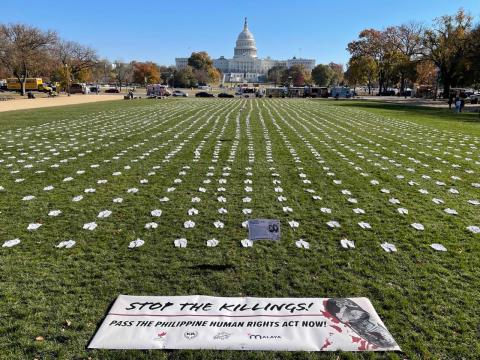 The Maryknoll Office for Global Concerns has joined efforts to promote a bill that seeks to strengthen human rights protections in the Philippines. The following article was published in the January-February 2022 issue of NewsNotes.

Activists concerned about human rights violations in the Philippines have rallied behind a new bill in Congress, the Philippines Human Rights Act, introduced by Rep. Susan Wild of Pennsylvania with 26 co-sponsors. The Act calls for the United States to suspend security assistance to the Philippines until the government demonstrates respect for the human rights of its citizens.

Under the current administration of President Rodrigo Duterte, infamous for his statements encouraging law enforcement to kill drug suspects and promising police immunity, over 30,000 Filipinos are believed to have been killed by police and other Philippine security forces. The International Criminal Court has found evidence of crimes against humanity and Global Witness has named the Philippines as one of the deadliest countries in the world for land defenders, journalists, trade unionists, and activists.

Leaders in the Philippine Church have spoken out against the extrajudicial killing and human rights violations carried out by the Duterte administration since 2016. In the words of Filipino Bishop Gerardo Alminaza, “In sadness, we are all crying out: End the killings! These barbaric and calculated assassinations must end… May the growing death list disturb the conscience of the murderers. It is my ardent prayer that instead of perpetrating violence, they may open their eyes to the reality of truth – that life is precious, that it is a sin to kill.”

In speaking out, members of religious congregations and other Church organizations working to serve and protect victims of abuse have at times found themselves the victims of “red-tagging” – false accusations of terrorism and insurgency used to criminalize and even violently attack. The fight against actual armed insurgent groups is used as justification for martial law and sweeping government crackdowns on violent and nonviolent groups alike. President Duterte has threatened to “kill useless Bishops” who speak out against the drug war which has targeted unarmed civilians and government dissidents.

Despite the cries of Filipinos and the prayers of the Church, since Duterte took office in 2016, the United States has provided over $550 million in military aid to the Philippines and implemented paltry human rights restrictions and oversight. Activists in support of the Philippines Human Rights act argue that federal money should not go towards supporting President Duterte’s human rights violations in the Philippines.

The Maryknoll Office for Global Concerns has joined in advocacy in support of the Philippines Human Rights Act. In September, MOGC signed on to a letter by U.S. faith leaders in support of the bill. Read the letter here:
https://bit.ly/3IDdvA6

“Gross human rights violations under the Duterte Administration are indeed well documented,” the faith leaders stated. “While some have argued that U.S. aid is needed to defend against China, U.S. military assistance to the army and police does not serve to defend the Philippines against the Chinese intrusions in the West Philippine Sea under Philippine jurisdiction. Instead, it is being turned against the most vulnerable and marginalized among the country’s population. We earnestly ask you to join us in advocating for the rights of the most exploited and oppressed in the Philippines and to co-sponsor the Philippine Human Rights Act.”

In November, MOGC participated in a demonstration on the lawn outside the U.S. Capitol in support of the bill. For the Nov. 18 demonstration, 3,000 pairs of “tsinelas,” Tagalog for “flip-flops,” were laid out on the lawn to represent the more than 30,000 extrajudicial killings that have occurred during the Duterte administration. §

Faith in action: Write to your representative to urge them to support the Philippines Human Rights Act: https://bit.ly/3yitW0e