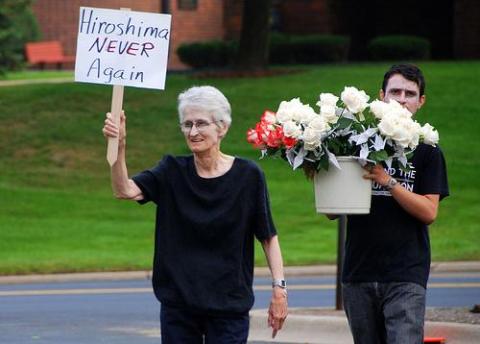 Nuclear disarmament is the issue of the past and future of the Catholic peace movement. The following article was published in the September-October 2022 issue of NewsNotes.

Pax Christi USA held its first national conference in six years in Washington, DC, August 5-7, commemorating the 50th anniversary of the U.S. chapter of the Catholic peace movement. The conference offered opportunities to take stock of Pax Christi’s 50 years of work for peace in the United States, and to listen to diverse and youthful voices as participants looked forward to the next 50 years.

The weekend was bookended by an issue that has been a constant for Pax Christi USA since its founding: nuclear disarmament.

The conference was preceded by a showing of the documentary film, “The Berrigans: Devout and Dangerous,” about the peace activism of brothers Dan and Phil Berrigan, including their Plowshares actions for nuclear disarmament. In a statement he wrote shortly before dying of cancer in 2002, Phil Berrigan said: “I die with the conviction, held since 1968 and Catonsville, that nuclear weapons are the scourge of the earth; to mine for them, manufacture them, deploy them, use them, is a curse against God, the human family, and the Earth itself.”

In the conference keynote, Archbishop John Wester of Santa Fe, expressed solidarity with this conviction when he explained why, after a visit to Japan where he learned more deeply about the suffering and death caused by the atomic bombs, he wrote his pastoral letter on nuclear disarmament, “Living in the Light of Christ’s Peace.” “We were the first to build and use nuclear weapons and so we must be part of the process that seeks to dismantle them, making sure that they are never used again,” Bishop Wester said.

Also at the conference, Maryknoll Sister Jean Fallon and nineteen other Catholic activists were commissioned as “Ambassadors of Peace.” Sister Jean's justice and peace ministry began in the late 1970s in Japan, where she first met those who had suffered through the atomic bombings of Hiroshima and Nagasaki. “When it comes down to it, people are trying to make us think that nuclear weapons are a protection when they are a danger – the very thing we need to fear,” Sr. Jean told the Global Sisters Report in 2014. Over the years, she has carried that message from Japan to churches across the United States and to the United Nations in New York.

Marie Dennis, senior advisor to Pax Christi International, was honored as a Teacher of Peace, and in her address, named nonviolence as the gospel value that connects Pax Christi’s various endeavors, from the nuclear issue to racial justice.

“Pax Christi’s commitment is to a nonviolence that imitates Jesus’ way of life,” she said, “but that is also challenged and shaped by the history and contemporary experience of those on the receiving end of war and racism and neglect and planetary destruction.”

Drawing on the teaching of Franciscan Sister theologian Ilia Delio, who, Dennis said, challenges us to “co-create a world bounded in love,” Dennis said she feels hopeful for the next 50 years, despite an awareness gained during the previous 50 years of the ongoing need to address root causes of injustice.

“I believe that we are on the threshold of a new way of being, a new paradigm, a new logic for life. What we are birthing will be closer to the beloved community; it will be anti-racist and socially just. It will be built on right relationships with each other and with the natural world. It will be richly, beautifully diverse and decidedly nonviolent. It will not depend on weapons of war but on right relationships, a commitment to inclusive human dignity and respect for the integrity of creation.

“This new paradigm will be based on a completely different understanding of our place as humans in the whole Earth community — and a recognition that we are latecomers at that to a spectacular cosmic reality that we are just now (thanks to the Hubble and Webb telescopes) beginning to see. It will recognize that diversity and relationality are imbedded in the cosmos and essential to survival on this planet. And it will clearly identify and reject violence in all its forms: armed violence, physical violence, structural and systemic violence, gender and racial violence, cultural, ecological, economic, spiritual and psychological violence.”

The conference ended with a nonviolent action at the Pentagon, in which participants prayed for the victims of the atomic bombing of Hiroshima and Nagasaki, and held “peace ribbons” depicting things they “could not bear to imagine being lost in a nuclear war.”

Photo: Maryknoll Sister Jean Fallon holds a sign that says 'Hiroshima Never Again' at a prayer vigil marking the anniversary of the atomic bombings in Japan.. Photo courtesy of the Maryknoll Sisters.