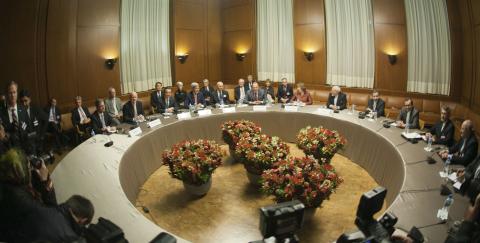 Although a UN gathering to review a cornerstone nuclear treaty has again been postponed, five nuclear weapons states issued a statement expressing commitment toward preventing nuclear war. The following article was published in the January-February 2022 issue of NewsNotes.

The statement was timed to coincide with the beginning of the tenth United Nations Review Conference on the Treaty on the Non-Proliferation of Nuclear Weapons (NPT), but the conference, originally to take place in 2020 and rescheduled for January 2022, has once again been postponed until later in the year, likely August, due to COVID-19 concerns.

The P-5 statement does not include any new, concrete commitments by the nuclear powers. However, it does outline a vision that focuses on risk reduction and reiterates commitments to disarmament under the NPT. The statement also affirms a principle first expressed by U.S. President Ronald Reagan and Soviet leader Mikhail Gorbachev in 1985, that “a nuclear war cannot be won and must never be fought,” building on bilateral talks between President Biden and Russian President Vladimir Putin last year in which the two also agreed to the Reagan-Gorbachev principle.

More than 50 years since the NPT entered into force in 1970, there are still more than 10,000 nuclear warheads on Earth – 90% of them held by the United States and Russia. Most arms control experts say the NPT, on balance, has been successful at helping reduce the size of arsenals held by superpowers.

Amid other global crises such as the coronavirus pandemic and climate change, the issue of nuclear weapons receives little media attention. However, together with climate change, the nuclear threat is widely regarded by scientists and security experts as one of the “twin existential threats” to life as we know it. Experts at the Bulletin of the Atomic Scientists say the nuclear threat is only increasing in urgency as global instability has increased due to climate change, weakened global partnerships and declining momentum for disarmament.

In the hopes of galvanizing progress toward nuclear disarmament, 86 nations including the Holy See have signed a new Treaty on the Prohibition of Nuclear Weapons (TPNW). First signed in 2017 and effective as of January 2021, the TPNW is the first legally-binding international agreement to comprehensively ban nuclear weapons.

Although none of the nine nuclear powers have signed it so far, the nuclear ban treaty helps build international legal norms against the possession of nuclear weapons.

Nuclear disarmament is an essential element of the Catholic Church’s call to protect all life and defend human dignity. Recent papal documents and speeches by Vatican authorities have reaffirmed Catholic teaching that nuclear weapons are a threat to life and to our common home. Money spent on our nuclear arsenal should instead be spent to promote economic and climate justice and a security regime based on trust and solidarity.

Pope Francis has emphasized the Church’s opposition to nuclear weapons, stating for the first time that not only the use but the very possession of nuclear weapons by nations is immoral. The Holy See was among the first states to ratify the nuclear ban treaty, and Pope Francis has actively promoted the treaty, hosting a 2017 gathering at the Vatican.

In May 2021, a group of leading scientists and Catholic leaders, including Susan Gunn of the Maryknoll Office for Global Concerns, sent a letter to Pres. Biden with recommendations for the United States’ recommitment to a world free of nuclear weapons.

“We will urge bipartisan support of an ambitious nuclear disarmament agenda,” they wrote. “We call on President Biden to reaffirm the goal of a world free of nuclear weapons and to take concrete steps to realize it.” The letter calls on President Biden to affirm the nuclear ban treaty and to use the NPT review conference in 2022 as an opportunity to make nuclear disarmament a reality.

While the postponement of the NPT review conference is a disappointment, the P-5 statement outlines principles on which to build more concrete commitments. Between now and August, civil society groups can pressure nuclear weapons states to live up to the principles affirmed in their statement and outline steps for fulfilling their disarmament commitments.

Faith in action: Read the letter signed by scientists and Catholic leaders calling for the United States to recommit to a world free of nuclear weapons: https://bit.ly/CathSciNukes.

Photo of initial Iran deal negotiations by the P5 available in the public domain.