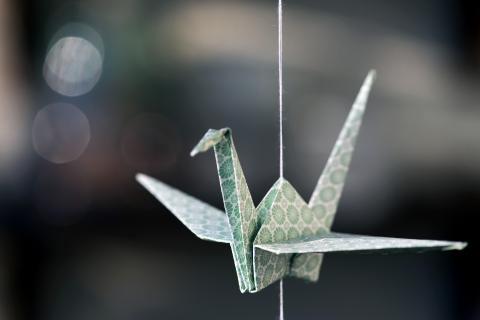 Inspired by the gospel and Maryknoll missioners’ commitment to stand with vulnerable communities around the world, we offer two-page briefs as resources on the intersection of global policy and Catholic social thought. Here is an excerpt. Find the complete policy brief at https://bit.ly/MOGCPolicyBriefs. This article was published in the November-December 2021 issue of NewsNotes.

Nuclear weapons and climate change are widely recognized by scientists and security experts as “twin existential threats” to life on earth. While much more action is needed, the gravity of climate change has largely entered the global consciousness, thanks to global youth activism. But since the end of the Cold War, the nuclear threat has failed to grab the public imagination in the same way.

Experts warn that the danger of nuclear annihilation is greater than ever, citing the dismantling of the global arms control regime, as world leaders walk away from agreements and multilateral structures which reduce the nuclear threat with no plans for how to replace them. Vast resources are spent on new nuclear weapons, including the development and deployment of “low-yield” nuclear weapons which can be used to wage “winnable” wars and new Pentagon plans for a nuclear first strike.

Nukes By the Numbers

The coronavirus epidemic has been a stark reminder that we live in a globally interdependent world. True security demands international structures for building trust and cooperation. “We are witnessing an erosion of multilateralism which is all the more serious in light of the growth of new forms of military technology. Such an approach seems highly incongruous in today’s context of interconnectedness; it represents a situation that urgently calls for the attention and commitment of all leaders.” – Pope Francis, “Address of the Holy Father on Nuclear Weapons,” Nagasaki, 24 November 2019

Maryknoll Sister Jean Fallon worked in Japan with survivors of the atomic bombings in Hiroshima and Nagasaki. She has said, “At some point, the people of the world are going to wake up. They’re just going to get to a point in the world where they’re going to say, ‘If we don’t stop this, there’s not going to be anything left on Earth.’ There’s more than one power at play here, and that’s the power of the people and the power of God.”

Pope Francis and the U.S. Conference of Catholic Bishops have repeatedly condemned the possession of nuclear weapons – even for purposes of deterrence – as sinful and unacceptable. Nuclear weapons are a threat to life and to our common home, and money spent on our nuclear arsenal should instead be spent to promote economic and climate justice, and build a security regime rooted in trust and enforced by effective, nonviolent measures. Nuclear disarmament is an essential element of the Church’s call to protect all life and defend human dignity.

“In a single plea to God and to all men and women of good will, on behalf of all the victims of atomic bombings and experiments, and of all conflicts, let us together cry out from our hearts: Never again war, never again the clash of arms, never again so much suffering! Come, Lord, for it is late, and where destruction has abounded, may hope also abound today that we can write and achieve a different future.”- Pope Francis, Hiroshima, 24 November, 2019

Catholics in the United States face a disheartening gap between U.S. nuclear policy on the one hand, and the clear teachings of the Church on the other. But there are practical, achievable steps policymakers can take toward the ultimate goal of total nuclear disarmament. Read the latest information and analysis on nuclear arms policy from the Arms Control Association at https://www.armscontrol.org/

Also, send a message to President Biden telling him to take concrete steps to rid the world of nuclear weapons. https://bit.ly/NuclearDisarm