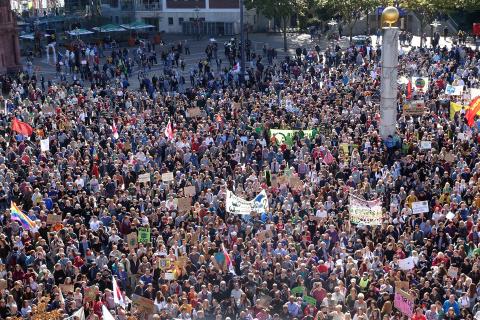 The Death of Robert Mugabe: Sr. Janice McLaughlin, MM, describes her first-hand experience with the Zimbabwean leader, Robert Mugabe, who died on September 6 at the age of 95.

Climate Change and the Oceans: The Intergovernmental Panel on Climate Change (IPCC) issued a report in September that details the climate's dramatic impact on the oceans.

Hong Kong Cardinal Calls for Nonviolence: Cardinal John Tong of Hong Kong named Gandhi and Mandela as peaceful examples for pro-democracy protesters to follow in a speech broadcast on local radio on October 12. The following article was published by the Union of Catholic Asian News (UCANNews) on October 22, 2019.

Bishops Comment on Crisis in Haiti: An office within the Haitian Bishops conference has commented on the emerging crisis in Haiti.

Supreme Court to Decide Fate for Dreamers: Ilse Cruz, an undocumented college student from Florida, writes about the Deferred Action for Childhood Arrival (DACA) cases set to come before the Supreme Court on November 12.

Amazon Synod Concludes in Rome: The Special Assembly of Bishops for the Pan-Amazonian Region took place in Rome in October on the theme, “Amazonia: new paths for the Church and for an integral ecology.”

Journey for Justice in El Paso: Maryknoll Office for Global Concerns participated in a teach-in and action in El Paso, Texas, on the themes of immigration, anti-racism, and Catholicism in the borderlands.

Resources: Find links to the final document produced by the Amazon Synod, a pastoral letter on immigration and racism by Bishop Seitz of El Paso, analysis of the crisis in Haiti, and much more.