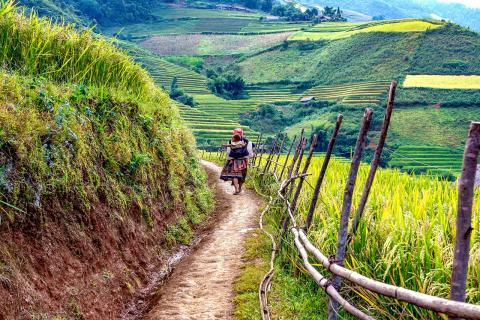 Climate change: New global agreements - Leading up to the next United Nations Climate Change Conference (known as the Conference of Parties or COP22) scheduled to meet in Marrakesh, Morocco November 14-15, countries and industries have been moving forward with new agreements to further limit greenhouse gas emissions.

Climate change: Concerns about green bonds - As green bonds approach their tenth anniversary as a capital-raising and investment tool for projects that have positive environmental or climate benefits, questions remain over how well they are managed.

Global migration crisis: New York Declaration - On September 19 the United Nations held its first-ever Summit for Refugees and Migrants. The purpose of this gathering was for heads of state to adopt the New York Declaration, a lengthy political declaration that “expresses the political will of world leaders to save lives, protect rights and share responsibility on a global scale.”

World AIDS Day: Prayer vigil - World AIDS Day is held on December 1 each year around the world. It is an opportunity to raise awareness, commemorate those who have died, and celebrate victories such as increased access to treatment and prevention service.

Trade: Indigenous peoples say “Water is life” - Maryknoll Sister Patricia Ryan and members of the indigenous community where she works in Peru came to Washington, D.C. in September to pursue legal efforts to stop a mining company from polluting their sacred land and water. At the same time, Native American Sioux Indians from Standing Rock Reservation in North Dakota were leading demonstrations in front of the White House with a very similar goal.

Fair trade: The Human Thread Campaign - The Human Thread, a Catholic advocacy group for garment workers, launched a national postcard campaign that asks Macy's and Kohl's to add a fair trade clothing item to their department store racks and shelves.

El Salvador: A rare win against mining company - The government of El Salvador recently won a long-running legal battle when an international trade tribunal ruled that it did not have to pay compensation to a mining company that was denied a permit to drill for gold. El Salvador declared a moratorium on mining concessions in 2009, in an attempt to protect its water supply from being pollution, despite having previously signed international trade agreements.

Haiti: U.S. deportation policy in flux - The United States is set to resume deportations to Haiti despite authorities reporting that it may take decades for Haiti to recover from Hurricane Matthew.

Colombia: What we have won by losing - On October 2, voters in Colombia rejected by a very slim margin a peace deal that would have ended a 50-year civil war. Colombian Fr. Francisco de Roux, SJ, one of the participants in the Nonviolence and Just Peace conference held in Rome last April, wrote the following reflection immediately after the results of the vote were announced. This reflection was originally published by the Catholic Nonviolence Initiative, https://nonviolencejustpeace.net/.

Taiwan: Justice for migrant workers - In October Taiwan's legislature passed an amendment to the Employment Service Act, which eases a significant burden on migrants working there.

Philippines: Respect the dignity of life - Voices of the church continue to denounce the massive wave of extrajudicial killings in the Philippines incited by President Rodrigo Duterte.

Myanmar: “Peace is the only way” - The people of Myanmar have seen hopes for peace intensified in recent months, only to have them threatened by further human rights abuses and warfare.

>Syria: Bring the killing to an end - Pax Christi International issued a statement on the occasion Action Day for Peace in Syria on October 24.