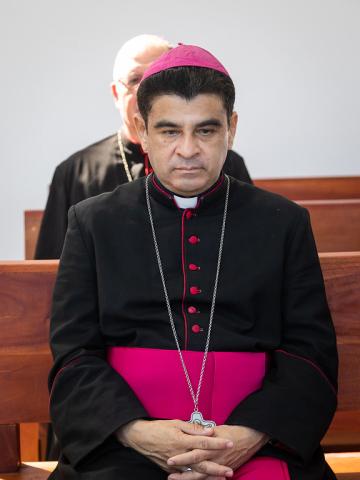 After silencing the press and closing most NGOs, Ortega’s Sandinista government goes after the only influential independent organization left in Nicaragua – the Catholic Church. The following article was published in the September-October 2022 issue of NewsNotes.

The government of Nicaraguan President Daniel Ortega and his wife, Vice President Rosario Murillo, has intensified its attacks on the Catholic Church, arresting Matagalpa Bishop Rolando Alvarez, five priests, two seminarians and one lay man on August 19, in a dramatic pre-dawn raid on the diocesan headquarters where the men had been effectively under house arrest for two weeks, surrounded by police and unable to leave. Church bells rang out in alarm as the prisoners were removed from the residence by police.

The men were taken to Managua, where the 55 year-old bishop was placed under official house arrest in the home of his parents, while the others were sent to the Managua prison known as “El Chipote,” where the Ortega-Murillo regime is keeping over 190 political prisoners. Perhaps not coincidentally, Alvarez has vocally condemned the prison, calling for the inmates’ release.

The church leaders are accused of “taking advantage of their condition as religious leaders, utilizing the media and social networks trying to organize violent groups, inciting them to carry out acts of hate against the population, provoking an atmosphere of unease and disorder, affecting the peace and harmony in the community, with the aim of destabilizing the Nicaraguan State and attacking the Constitutional authorities.” Authorities have provided no evidence of organizing violence.

The arrests mark the latest in a string of repressive measures against the Catholic Church in Nicaragua, especially since the brutal crackdown on massive protests across the country in 2018. In recent months bishops and priests have been threatened and forced into exile, 12 Catholic radio stations have been shuttered, and Mother Teresa’s Missionaries of Charity were expelled from the country. Bishop Alvarez has been a prominent critic of these acts of repression.

Ortega once enjoyed the support of significant church figures in Nicaragua. When his Sandinista party first took power in 1979, four priests served in the government, including Maryknoll Father Miguel D’Escoto, who was Ortega’s foreign minister. When the 2018 protests began, Ortega turned to the Catholic Church and to Alvarez himself to mediate a dialogue between the government and protesters, but that mediation effort broke down when church leaders insisted the government address demands for greater democracy.

Church authorities across the Americas and beyond have responded to the latest arrests with statements of condemnation and expressions of solidarity with Bishop Alvarez and the other detained men, and with the Church in Nicaragua and all the Nicaraguan people.

The Bishops Conference of Latin America and the Caribbean, CELAM, issued a statement of solidarity on August 6, when Alvarez and his colleagues were first detained in Matagalpa. The conference, it says, “joins in the suffering of the great people of Nicaragua and the pilgrim Church in that beloved land, her faithful and pastors, under the constant harassment they are suffering at the hands of government authorities.

“The latest events, such as the siege of priests and bishops, the expulsion of religious congregations, the desecration of temples and the closure of radio stations causes us deep pain. We express our solidarity and closeness.”

The CELAM statement has been followed by similar statements from around the world. The bishops conference of Central America, and in Bolivia, Brazil, Chile, Costa Rica, Cuba, Dominican Republic, Ecuador, Guatemala, Honduras, Italy, Mexico, Peru, El Salvador, Spain, and Venezuela, as well as the chairman of the U.S. Conference of Catholic Bishop’s Committee on International Justice and Peace, and the California Catholic Conference issued statements condemning the Ortega-Murillo government’s actions and expressing solidarity with the Nicaraguan church and people.

The Vatican’s response has been more muted, as the pope and Holy See seek always to leave open the possibility of dialogue, and to avoid exacerbating tensions. But on August 12, at a special session of the Permanent Council of the Organization of American States (OAS) in which the body condemned the Nicaraguan government’s actions, the Permanent Observer of the Holy See to the OAS, Msgr. Juan Antonio Cruz, expressed “concern” over the situation, and called for dialogue and mutual understanding rooted in “respect and mutual trust, seeking above all the common good and peace.”

Pope Francis also expressed his concern during his August 21st Angelus remarks. “I am following closely, with concern and sorrow, the situation created in Nicaragua that involves persons and institutions,” Francis told the crowd in St. Peter’s Square. “I would like to express my conviction and my hope that, through an open and sincere dialogue, the basis for a respectful and peaceful co-existence might still be found.”

Photo: Bishop Rolando Alvarez of the Diocese of Matagalpa in Nicaragua, 2019. Photo by Ramírez 22 nic, CC BY-SA 4.0, via Wikimedia Commons