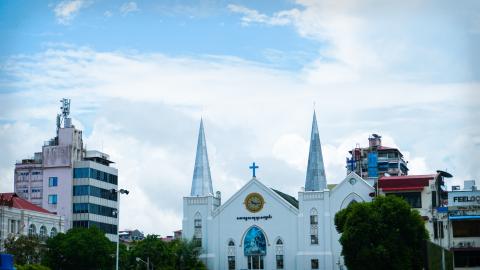 UCANews reported on April 26, 2022 that a new U.S. government report likens the situation of Christians in Myanmar to what the Rohingya have faced there since 2017. The following article was published in the May-June 2022 edition of NewsNotes.

The U.S. Commission on International Religious Freedom (USCIRF) has drawn parallels between the situation of minority Christians in Myanmar with the persecution faced by Rohingya Muslims since 2017.

In its annual report released on April 25, the commission said: “Faith communities, including ethnoreligious Christian minorities, now face persecution that some have likened to what the Rohingya have faced since 2017.”

The military known as the Tatmadaw under its chief Min Aung Hlaing has closely associated itself with Buddhist nationalism to promote its legitimacy, the report said, while detailing how this led to rise in persecution of Christian communities during 2021.

“In February, the Tatmadaw raided Hakha Baptist Church in the capital of Chin state, arresting the pastor. The same month, the Tatmadaw raided a Kachin Baptist church in Shan state. In March in Kalay township in Sagaing Region, the military shot and killed 25-year-old pastor Chung Lian Ceu and three other civilians,” the report said.

“The Tatmadaw targeted houses of worship, faith leaders and religious communities in its crackdown on the opposition ... it arrested religious leaders, including those from the Buddhist majority, for opposing the military junta.”

USCIRF has called on the U.S. government to redesignate Myanmar as a “country of particular concern” for engaging in systematic, ongoing and egregious violations of religious freedom as defined by the International Religious Freedom Act.

It further recommended actively supporting international efforts to hold the Tatmadaw, state agencies and officials accountable through the international legal system for atrocities against religious communities, including by intervening in the case filed by the Gambia at the International Court of Justice.

Myanmar continues to be on the list of countries blacklisted by the U.S. State Department along with China, Eritrea, Iran, North Korea, Pakistan, Russia, Saudi Arabia, Tajikistan and Turkmenistan.

The US had slapped a series of sanctions on the coup leaders, their families and military-linked companies over atrocities against civilians including ethnic tribes following the military coup.

The 2017 mass killings, rapes and other atrocities perpetrated against Rohingya Muslims in Rakhine state, forcing over 745,000 to flee to Bangladesh, were recently designated as a genocide by the US...

Christians make up some 6 percent of Myanmar’s population of 54 million, while Buddhism is the state religion with nearly 89 percent of the population adhering to it.